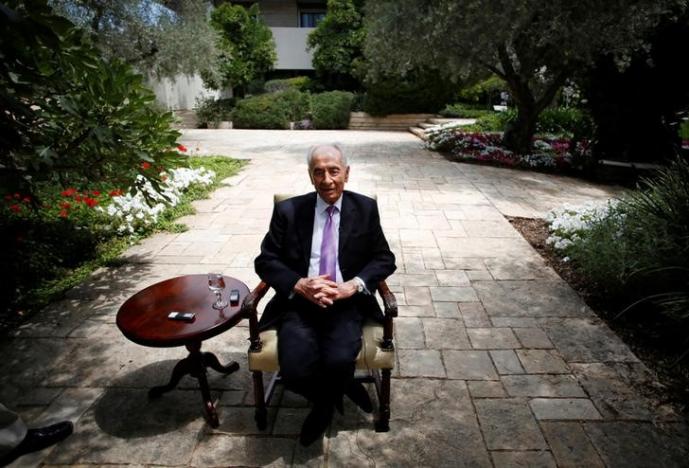 JERUSALEM - Former Israeli president and elder statesman Shimon Peres, 93, died in Tel Aviv on Wednesday, prompting US President Barack Obama to mourn: "A light has gone out, but the hope he gave us will burn forever". Peres, an indefatigable campaigner for Middle East peace who jointly won the Nobel Peace Prize in 1994, was hospitalized following a stroke two weeks ago and died in Tel Hashomer hospital near Tel Aviv. "There are few people who we share this world with who change the course of human history, not just through their role in human events, but because they expand our moral imagination and force us to expect more of ourselves. My friend Shimon was one of those people," Obama said in a statement. Media reports said Obama was planning to attend Peres's funeral, which Israeli media said was expected to be held on Friday, although details of the ceremony were not made public. Israeli Prime Minister Benjamin Netanyahu issued a statement expressing "deep personal grief at the passing of the beloved of the nation." The Israeli cabinet was to convene for a special session of mourning at 10 a.m (07:00 GMT). A official announcement of Peres's death was made at the hospital by his son Chemi and son-in-law Rafi Walden, who said he died without suffering and that he had donated his corneas for transplant. "His life ended abruptly when he was still working on his great passion, strengthening the country and striving for peace. His legacy will remain with us all," Walden, who was also Peres's personal physician, said. Peres was part of almost every major development in Israel since the country's founding in 1948. In a career spanning nearly 70 years, he served in a dozen cabinets and was twice a Labour prime minister. He shared the 1994 Nobel Peace Prize with the late former prime minister Yitzhak Rabin and late Palestinian leader Yasser Arafat for reaching an interim peace deal in 1993 which never turned into a lasting treaty. Rabin was assassinated in 1995 by an Israeli ultra-nationalist who opposed the interim accords, and it was Peres who took over as prime minister after Rabin's death. Peres is widely seen as having gained nuclear capabilities for Israel by procuring the secret Dimona reactor from France while defense ministry director-general in the 1950s. And as defense minister oversaw the 1976 Israeli rescue of hijacked Israelis at Entebbe airport in Uganda. Peres held the largely ceremonial post of president from 2007-2014 and used the pulpit to continue to advocate peace. Earlier in September, after a series of health scares including a mild heart attack, Peres received an artificial pacemaker. -Reuters