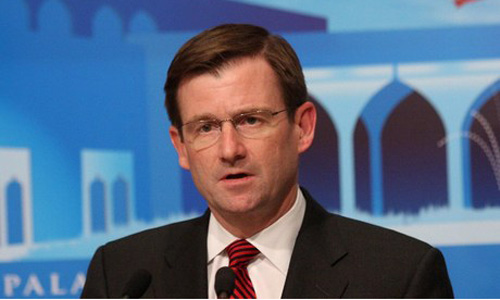 WASHINGTON - President Barack Obama has nominated David Hale as the next US ambassador to Pakistan, 92 News reported. Hale, a member of the Foreign Service, is currently serving as the US Ambassador to Lebanon, a position he has held since 2013. The nomination needs the US Senate confirmation. Hale will succeed Richard Olson who has been US ambassador in Islamabad since September 2012. Hale previously served as the Special Envoy for Middle East Peace from 2011 to 2013 and as Deputy Special Envoy for Middle East Peace from 2009 to 2011. From 2008 to 2009, he was a Deputy Assistant Secretary of State in the Bureau of Near Eastern Affairs at the Department of State. Prior to that, Hale served as US Ambassador to Jordan from 2005 to 2008. He served at the US Embassy in Jordan as Charge d’ Affaires from 2004 to 2005 and as Deputy Chief of Mission from 2003 to 2004. Ambassador Hale has also served as Director of the Office of Israel and Palestinian Affairs, Executive Assistant to the Secretary of State and in other positions overseas in Bahrain, Lebanon, and Saudi Arabia. Ambassador Hale joined the Foreign Service in 1984. He studied at Georgetown University’s School of Foreign Service.