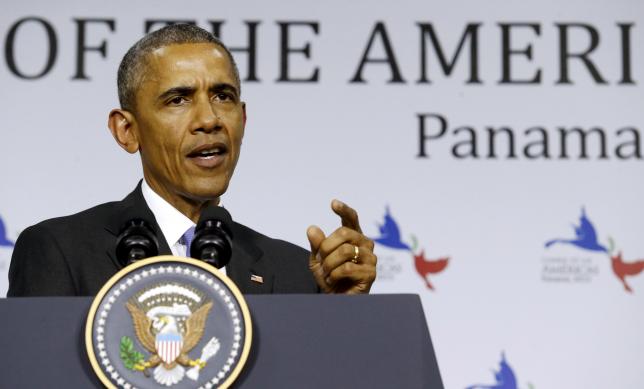 PANAMA CITY - US President Barack Obama expressed optimism on Saturday that major world powers and Iran could finalize a deal to curb Iran's nuclear program despite strong words this week from the country's Supreme Leader Ayatollah Ali Khamenei. Obama downplayed Khamenei's demands that a final deal result in an end to all sanctions on Iran, telling reporters at the Americas summit in Panama that Khamenei and others inIran were addressing their own internal politics. "Even a guy with the title 'Supreme Leader' has to be concerned about his own constituencies," Obama said. "There may be ways of structuring a final deal that satisfy their pride, their optics, their politics, but meet our core practical objectives," Obama said at the news conference. Iran and world powers reached a framework nuclear agreement on April 2 that would require Iran to shut down parts of its nuclear program that could be used to build a bomb, and accept intrusive inspections, in exchange for the West lifting economic sanctions. Negotiators need to finalize technical details by June 30. "What I've always said, though, is that there's the possibility of backsliding," Obama said, noting the final deal would require tough talks and may not result in a deal that he would sign. But he blasted some US Republican senators who have argued against the deal, including Arizona Senator John McCain, who told a conservative radio show this week that he found Khamenei's interpretation of the deal more credible than that of Secretary of State John Kerry, who has said sanctions would be lifted in phases and "snap back" in place if the deal is violated. "That's not how we're supposed to run foreign policy, regardless of who is president or secretary of state," Obama said. Obama said he has talked to the top Republican and Democratic senators on the Senate Foreign Relations committee about the role for the US Congress in assessing the final deal. Kerry is expected to brief lawmakers this week. "What I'm concerned about is making sure that we don't prejudge it, or those who are opposed to any deal whatsoever try to use a procedural argument essentially to screw up the possibility of a deal," Obama said. - Reuters