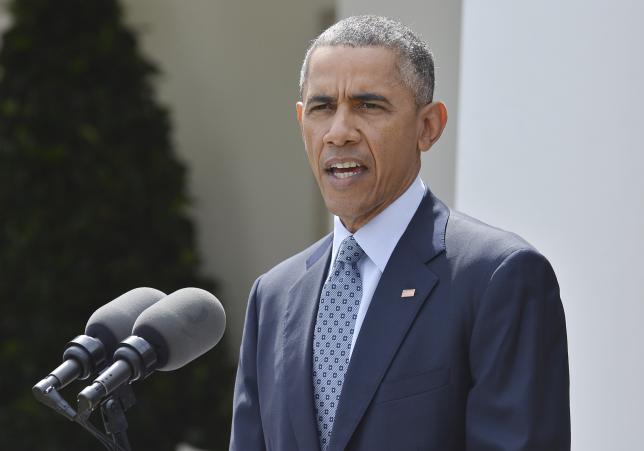 WASHINGTON – President Barack Obama said he would have a "tough conversation" with America's Gulf Arab allies in which he would promise strong US support against external enemies but tell them they must address internal political challenges. In an interview with New York Times columnist Thomas Friedman published on Sunday, he said he would tell Gulf states they also needed to be more active in addressing regional crises. "I think when you look at what happens in Syria, for example, there’s been a great desire for the United States to get in there and do something," he said in the interview, conducted on Saturday. "But the question is: Why is it that we can’t have Arabs fighting [against] the terrible human rights abuses that have been perpetrated, or fighting against what Assad has done?" he added, referring to Syrian President Bashar al-Assad. Obama said last week he would meet the leaders of the six Gulf Cooperation Council states this spring at his Camp David retreat outside Washington, partly to discuss their concerns about the emerging nuclear agreement with Iran. The GCC includes Saudi Arabia, Kuwait, the United Arab Emirates (UAE), Qatar, Oman and Bahrain. Saudi Arabia, which sees Iran as its main regional rival, has repeatedly hinted that it would seek its own atomic weapons if Tehran ever did the same. Gulf states are part of the US-led coalition campaigning against Islamic State militants who have taken over large parts of Syria and Iraq. Obama said he wanted to discuss with the Gulf allies how to build more effective defense capabilities and assure them of US support against outside attack. "...that perhaps will ease some of their concerns and allow them to have a more fruitful conversation with the Iranians," he said. But the president said their biggest danger came not from a possible attack from Iran but from dissatisfaction inside their own countries, including from alienated, unemployed youth and a sense that there was no political outlet for grievances. So as well as giving military support, the United States must ask: "How can we strengthen the body politic in these countries, so that Sunni youth feel that they’ve got something other than (the Islamic State) to choose from," Obama said. "That’s a tough conversation to have, but it’s one that we have to have," he said. –Reuters