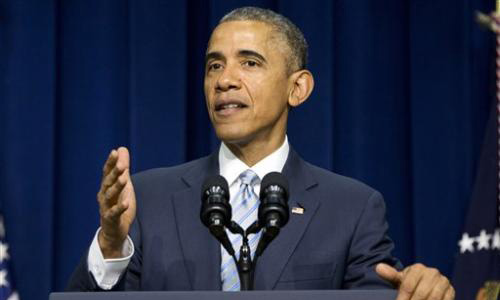 WASHINGTON - President Barack Obama said on Wednesday he was ready to sign bipartisan legislation to change the formula for reimbursing Medicare physicians, while the U.S. Senate's top Democrat appeared open to allowing a vote on the measure. Both developments signified growing support for a bipartisan effort to address a persistent problem and make small adjustments in Medicare costs. But the timeline could slide as the Senate may be unable to act until after a two-week recess that will start this weekend. "Congress is working to fix the Medicare physician payment system. I’ve got my pen ready to sign a good, bipartisan bill," Obama, a Democrat, said at the White House, adding that this would be "really exciting." The House of Representatives is expected to vote on Thursday on the proposal negotiated by Republican Speaker John Boehner and Democratic Leader Nancy Pelosi. Their proposal would replace the current Medicare doctor payment formula with one that has a stronger focus on quality of care, sparing doctors a 21 percent pay cut that they would otherwise face on April 1 under the existing payment formula, which is linked to economic growth. The legislation includes some Medicare reforms sought by Republicans and a two-year extension of the Children's Health Insurance Program (CHIP) for low-income children, sought by Democrats. White House spokesman Josh Earnest called the measure a "reasonable compromise." "And that's why the president is supportive of this process in the House. He believes it should get careful consideration in the Senate," Earnest told reporters. While the bill is expected to pass the House, its path forward has been unclear in the Senate, where Democratic Leader Harry Reid and others in the minority party have expressed concern about anti-abortion language in the bill and their desire for four years, not two, of CHIP funding. "Senator Reid may still vote against it, but he sees his role at this point as trying to facilitate a vote," a Senate Democratic leadership aide told Reuters on Wednesday evening. However, he said, the Senate might not act until after the two-week recess. He said Democrats were open to passing a temporary pay remedy meanwhile. The proposal would add $141 billion to the U.S. deficit over 10 years, the Congressional Budget Office said on Wednesday. The overall cost is about $214 billion, but about $73 billion would be offset through savings in the bill, CBO said. - REUTERS