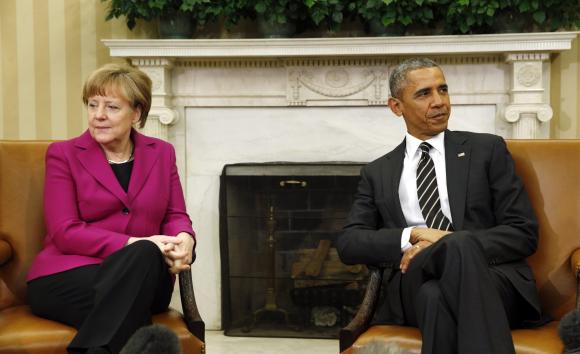 (Reuters) - U.S. President Barack Obama signaled on Monday he will wait for the results of high-stakes talks on Ukraine before deciding whether to arm the Kiev government, saying diplomacy and sanctions remain his preferred tools to resolve the crisis. Obama, at a White House news conference with visiting German Chancellor Angela Merkel, said providing weapons to Ukrainewas among the options he and his advisors were considering. But he made clear he had reservations about upping the ante inUkraine and endangering U.S.-European unity in the contest of wills with Russian President Vladimir Putin. Merkel opposes sending weapons to Kiev to help it fight Russian-backed separatists. "It is true that if, in fact, diplomacy fails, what I've asked my team to do is to look at all options," Obama said. "But I have not made a decision about that yet." Despite prompting by a German reporter, the U.S. president pointedly declined to lay down a 'red line' that, should Putin cross it, would prompt him to authorize weapons for Ukraine. In the face of a new offensive by separatists in eastern Ukraine, some of Obama's top advisors, as well as hawkish U.S. lawmakers, are pressing him to do more to help the Ukrainian government defend itself. But that question has been overshadowed, at least temporarily, by a revived diplomatic push led by Merkel and French President Francois Hollande. The two are due to meet with Putin and Ukrainian President Petro Poroshenko in Belarus on Wednesday. Obama has long been skeptical of arming proxies in places such as Syria and Ukraine, and "has not said anything ... to suggest he's moved on this issue," said Andrew Kuchins, director of the Russia and Eurasia program at the Washington-based Center for Strategic and International Studies. But Kuchins said that if the latest diplomatic effort fails, "then it will be incumbent on the administration to do something in response," such as increasing sanctions on Russia or considering arming Ukraine. KREMLIN REJECTS ULTIMATUM TALK The United States and the European Union say Russia has violated a September peace deal by sending more tanks and artillery into eastern Ukraine. European Union ministers held off tightening sanctions on Monday to give the latest talks a chance. Obama said he and Merkel had agreed sanctions must stay for now and Moscow's isolation would worsen if it continued on its current course. With the previous peace deal having failed, Merkel made it clear she was not predicting success for the latest talks. "I myself actually would not be able to live with not having made this attempt," she said. "There is anything but an assured success in all of this. I have to be very clear about this." Last week, Merkel and Hollande met Putin in Moscow and followed this up with a conference call on Sunday also including Poroshenko. But so far no breakthrough has emerged in the nearly year-long conflict that has claimed over 5,000 lives. Nine Ukrainian troops were killed in a 24-hour period over Sunday and seven civilians also died, Kiev said on Monday, with fighting particularly intense around the town of Debaltseve, a major rail and road junction northeast of the city of Donetsk. On Monday, European Union foreign ministers approved visa bans and asset freezes on more Ukrainian separatists and Russians. But they will wait at least until Feb. 16 before imposing the measures to give peace efforts more time, French Foreign Minister Laurent Fabius said. "The principle of these sanctions remains but the implementation will depend on results on the ground," he said. "We will see by Monday and see how the meeting in Minsk went." Sanctions imposed in stages by the EU and United States since Moscow annexed Crimea from Ukraine last March have badly hurt the Russian economy, adding to problems created by the plunging price of oil, the country's main export. Moscow warned on Monday that Putin will not be spoken to in the language of ultimatums. Asked about media speculation Merkel had issued him an ultimatum at talks on arranging a summit on Ukraine, Kremlin spokesman Dmitry Peskov told Govorit Moskva radio: "Nobody has ever talked to the president in the tone of an ultimatum, and could not do so even if they wanted to." OBAMA'S OPTIONS Merkel and Obama have come under fire from U.S. foreign policy hawks in the Republican-controlled Congress who want weapons sent to the Ukraine army. The U.S. Senate and House unanimously passed legislation in December that authorized sending arms for Kiev. Obama signed the measure into law but it gave him leeway over whether or when to implement it. Congressional aides said on Monday lawmakers were working on legislation that would commit Obama to providing arms. "The Ukrainians are being slaughtered and we're sending them blankets and meals," Sen. John McCain said at a security conference in Munich at the weekend. "Blankets don't do well against Russian tanks." Obama has to decide whether to supply weapons, impose tougher sanctions on Russia in the hope of forcing Putin to compromise, or throw his full weight behind the revised German-French peace initiative. He said his decision would not rest on a specific point. "Can we be certain that any lethal aid that we provide Ukraine is used properly, doesn't fall into the wrong hands, does not lead to over-aggressive actions that can't be sustained by the Ukrainians? What kinds of reactions does it prompt, not simply from the separatists but from the Russians? Those are all issues that have to be considered," he said at the White House. Some of his top advisers, including Ashton Carter, his choice for new defense secretary, increasingly favor providing items like anti-tank weapons, small arms and ammunition.