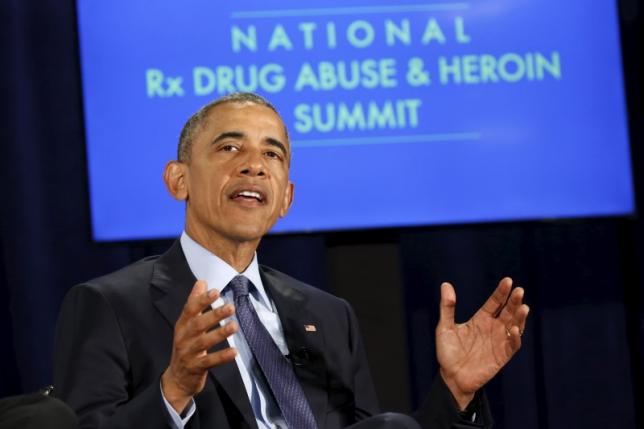 WASHINGTON - US President Barack Obama will sign legislation passed by Congress aimed at combating a nationwide epidemic of heroin and other opioid addictions, the White House said. After months of wrangling, the Senate voted overwhelmingly on Wednesday, 92-2, to pass the bill that has also been approved by the US House of Representatives. The measure aims to help communities develop treatment and overdose programs at a time when fewer than half the estimated 2.2 million Americans who need help for opioid abuse are receiving it, according to the US Centers for Human and Health Services. The White House said in a statement the bill "falls far short" of the necessary funding, but Obama would sign it "because some action is better than none." Republican Senator Rob Portman of Ohio, a leading proponent of the legislation, said that it marked "the first time that we’ve treated addiction like the disease that it is, which will help put an end to the stigma that has surrounded addiction for too long." While its passage marked a rare bipartisan effort in this election year, Democrats complained that it does not provide enough resources to effectively address the drug problem. "This bill is like a Hollywood movie set - something that appears real on the surface but has no substance and no life behind its facade," said Senator Charles Schumer of New York, the No. 3 Senate Democrat. US deaths from drug overdoses hit a record high in 2014, propelled by abuse of prescription painkillers and heroin, according to the US Centers for Disease Control and Prevention. According to the US Department of Health and Human Services, 28,000 people died from opioid overdose in 2014. At least half, HHS said, of those deaths involved a prescription opioid. Among the common prescription drugs are oxycodone, hydrocodone, and fentanyl that are used for pain treatment. Heroin-related deaths have also increased sharply, more than tripling since 2010. In 2014, more than 10,500 people died from heroin, the agency said. The bill authorizes $181 million a year for new programs it creates. Democrats said that with disagreements in Congress over next year's funding for HHS, it was uncertain whether the money contained in the bipartisan bill actually would be delivered. They called on Senate Majority Leader Mitch McConnell, a Republican, to back up this legislation with $600 million in immediate emergency funds. Obama has requested $920 million for opioid treatment programs over two years. The bill, if enacted into law, also would provide new training for emergency personnel in administering drugs to reverse opioid overdoses and help communities purchase those drugs. -Reuters