Obama slows withdrawal of US troops in Afghanistan 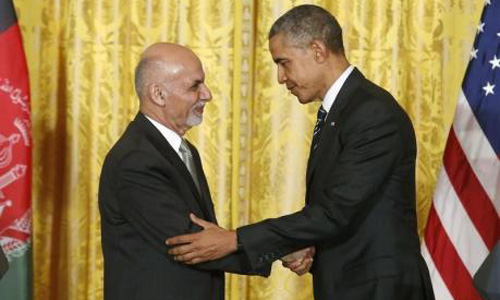 Obama slows withdrawal of US troops in Afghanistan

WASHINGTON - President Barack Obama on Tuesday granted Afghan requests to slow the drawdown of US troops from Afghanistan and said he would maintain a force of 9,800 through the end of 2015 while sticking to a 2017 exit plan. Capping a day of VIP treatment for Afghan President Ashraf Ghani at the White House, Obama said the US force would be kept at its current strength to train and assist Afghan forces, who took over responsibility for the fight against Taliban and other Islamic militants at the start of the year. Obama said the pace of the US troop reduction in 2016 would be established later this year and the goal remained to consolidate US forces in the country in a presence at the Kabul embassy at the end of 2016. Under a previous plan US forces were to have been cut to about half of the current level of just under 10,000 by the end of 2015, but US officials said improved relations with Afghan leaders contributed to a revision of the plan. "It was my assessment as commander in chief that it made sense for us to provide a few extra months for us to be able to help on things like logistics," Obama said during a joint news conference with Ghani at the White House. "The date for us to have completed our drawdown will not change," he said. "Providing this additional timeframe during this fighting season for us to be able to help the Afghan security forces succeed is well worth it." A senior US official told Reuters last week the US military bases in Kandahar and Jalalabad were likely to remain open beyond the end of 2015. Since arriving on Sunday, Ghani has been feted by the Obama administration and is due to address Congress on Wednesday. The welcome contrasts sharply with frosty relations that developed between Washington and Ghani's predecessor Hamid Karzai. GHANI THANKS US MILITARY Ghani has repeatedly expressed gratitude to the American military and at the White House spoke about meeting the widow of Major General Harold Greene, the highest-ranking US officer killed during the 13 years Americans fought in Afghanistan. "The 2,215 Americans that have died, must not die in vain. They must leave behind a legacy of a stable Afghanistan," Ghani said. Some U.S. lawmakers had also called for a slower drawdown of troop levels. US Representative Mac Thornberry, a Republican who leads the House of Representatives Armed Services Committee, said the decision announced on Tuesday was "appropriate." "Iraq has shown us the consequences of leaving a fragile ally too early," he said in a statement. "The bottom line is that our own security is at stake." Ghani and Afghanistan's Chief Executive Abdullah Abdullah met at the presidential retreat at Camp David on Monday with top U.S. officials including Defense Secretary Ash Carter, who said Washington would fund Afghan security forces at least into 2017. On Thursday will travel to the United Nations to meet Secretary General Ban Ki-moon. - Reuters