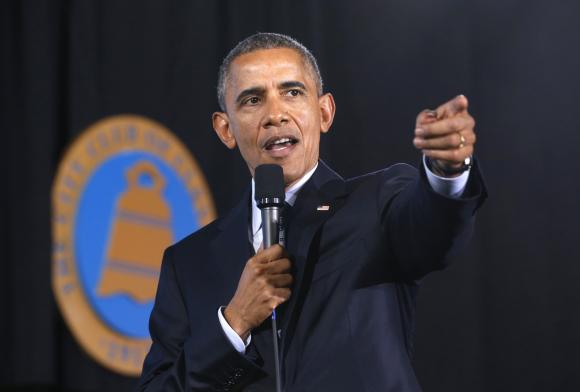 WASHINGTON (Reuters) - President Barack Obama will sign an executive order on Thursday that will cut the US government's greenhouse gas emissions, the White House said in a statement. After signing the order, Obama will visit the Department of Energy to tour the building's rooftop solar panels. While there, he will attend a meeting of some of the federal suppliers, which will discuss their reduction targets, including initial commitments to disclose emission targets or set new reduction goals, the statement said, without providing details. Obama has made fighting climate change a top priority in his final two years in office. The White House sees it as critical to his legacy. The Environmental Protection Agency last year proposed a Clean Power Plan that set deadlines for states to submit proposals to meet power plant carbon emission reduction goals. A dozen states, including Kentucky, West Virginia, Indiana and Wyoming, sued the EPA last August soon after the plan was unveiled on grounds that its use of a certain section of the Clean Air Act was illegal. The federal D.C. Circuit Court of Appeals will hear the case on April 16. Obama's budget proposal for fiscal 2015 released last month called for a 7 percent boost in funding for clean energy and a $4 billion fund to encourage US states to make faster and deeper cuts to emissions from power plants. It also called for the permanent extension of tax credits used by the wind and solar power industries.