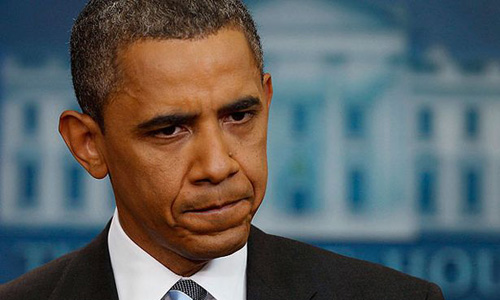 WASHINGTON (Reuters) - US President Barack Obama warned on Monday that a partial shutdown of the Department of Homeland Security would suspend pay for more than 100,000 border patrol, port inspection and airport security agents. "It will have a direct impact on your economy, and it will have a direct impact on America's national security because their hard work helps to keep us safe," Obama said in a speech to a meeting of state governors at the White House. Homeland Security spending authority will expire at midnight on Friday unless Congress approves new funding. While essential security personnel would still report to work, there would be no money to pay them during the funding lapse. A new $39.7 billion budget for the department is stalled in Congress over Republican-authored provisions to block any spending on Obama's recent executive orders that lift the threat of deportation from millions of undocumented immigrants. Republicans who control the US Senate will try for a fourth time to advance the measure later on Monday, but it was expected to fall short again of the needed 60 votes as Democrats reject it. Even if it were to pass, Obama has threatened to veto the measure unless immigration restrictions are stripped. Homeland Security Secretary Jeh Johnson said a cut-off in funding would cause most DHS headquarters employees to be furloughed, hampering the department's ability to coordinate domestic anti-terrorism activities. "If our headquarters staff is cut back to a skeleton, that inhibits our ability to stay on top of a lot of the existing situations and challenges to homeland security right now," he told a news conference, adding this was "not in the public's best interest." Aides to Senate and House Republicans declined to outline lawmakers' next steps. Some moderate Republicans support removing the immigration provisions or passing a one- or two-month extension of last year's funding levels, which would buy time for a court challenge to Obama's immigration orders. Senate Homeland Security and Government Affairs Committee Chairman Ron Johnson on Monday called for an end to the impasse but did not suggest a path forward. "Responsible members of both parties must work together to find some way to fund DHS without further delay," he said in a statement. A senior Senate Democratic aide said the party would likely reluctantly accept a short-term funding extension.