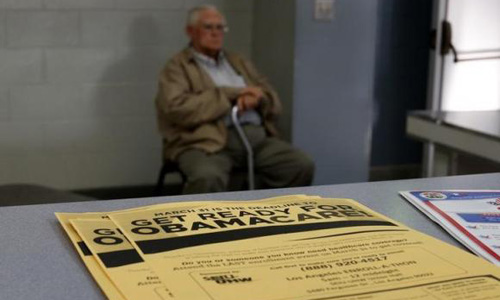 WASHINGTON - Early evidence suggests that the tax credit subsidies at the core of President Barack Obama's healthcare reform law likely helped expand U.S. health insurance coverage last year, Congress's non-partisan research arm said on Monday. The subsidies - which can be paid by the federal government to insurers in advance to lower monthly insurance premiums - significantly reduced the premium costs, the Government Accountability Office (GAO) said in a report. "Surveys GAO identified estimated that the uninsured rate declined significantly among households with incomes eligible for the APTC (Advanced Premium Tax Credit)," the GAO said. For example, one survey, conducted by Washington, D.C.'s Urban Institute, found the uninsured rate declined 5.2 percent between September 2013 and September 2014 among those eligible for the tax credit subsidies, the report said. The GAO also said its findings on the first year of the Obamacare insurance exchanges could not be generalized to future years because other factors, including health care costs, could affect the affordability of insurance going forward. The subsidies - aimed at making insurance more affordable for low-income people under Obama's Affordable Care Act - are being challenged in a Supreme Court case, King v. Burwell. In a ruling expected in June, the high court could bar the federally run insurance marketplace from providing the subsidies in at least 34 states. The plaintiffs contend the Affordable Care Act allows subsidies to be distributed only through state-based exchanges. Thirteen states and the District of Columbia set up their own exchanges from October 2013. The subsidies are available to people making between 100 percent and 400 percent of the federal poverty level. They can reduce insurance premiums dramatically - cutting them by 76 percent on average for people who picked an insurance plan on the federal exchange or on one of two state-based plans, the GAO said. Nearly 11.7 million people have either signed up or re-enrolled for insurance coverage under the U.S. healthcare reform law. The GAO said about 16 percent of non-elderly adults remain uninsured. - REUTERS