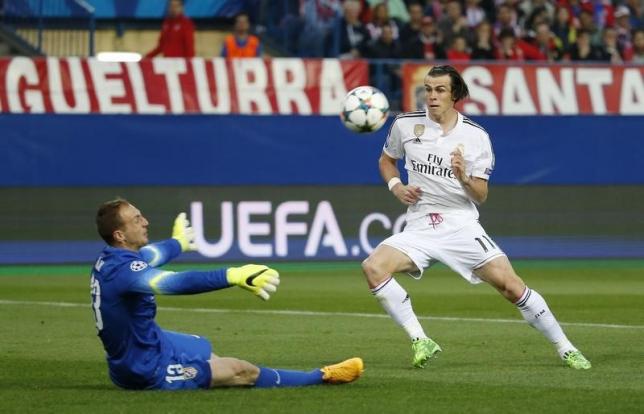 MADRID - Atletico Madrid goalkeeper Jan Oblak produced a heroic performance to repel holders Real Madrid and help secure a 0-0 draw in their Champions League quarter-final, first leg at the Calderon on Tuesday. Slovenian Oblak made a string of memorable saves against the team that beat Atletico in last season’s final to keep the Spanish champions’ hopes of reaching the last four alive ahead of next week’s return game at the Bernabeu. Atletico have had the upper hand over their wealthy neighbours in six derby meetings already this term but Real dominated for long periods in Tuesday’s clash and will be furious not to have come away with at least one away goal. Gareth Bale had probably their best chance as early as the third minute when he ran clear through the centre after a mistake from Diego Godin but Oblak raced out and blocked the Welshman’s shot. “I am really pleased like the rest of the team because today we worked a lot and it was a really hard match but we are still alive,” Oblak said in an interview with Spanish television broadcaster RTVE. “Of course you always want to score and win but it’s also important that we didn’t concede at home,” he added. “I don’t know who the favourites are now. Madrid are a great team with a lot of great players.” Real forced Atletico onto the back foot from the start in the 260th meeting between the city rivals and, after twice denying Bale, Oblak pulled off further saves from Cristiano Ronaldo and James Rodriguez. Atletico’s only real chance of the first half fell to Antoine Griezmann but the Frenchman’s weak shot was easy for Iker Casillas in the Real goal. With their fans roaring them on, Atletico saw more of the ball in the second period but Real, chasing a record-extending 11th European crown, again had the clearer chances and the home side were forced into some desperate defence. However, they managed to mount a couple of dangerous attacks late on and Casillas had to be alert to keep out a Mario Suarez effort after a scramble in the goalmouth. Atletico's Croatia forward Mario Mandzukic was in the thick of the action and suffered a head wound after he was caught by a flailing Sergio Ramos arm shortly after halftime but was able to play on after treatment. Atletico midfielder Suarez and Real defender Marcelo were both booked and will be suspended for the return leg on April 22. - Reuters