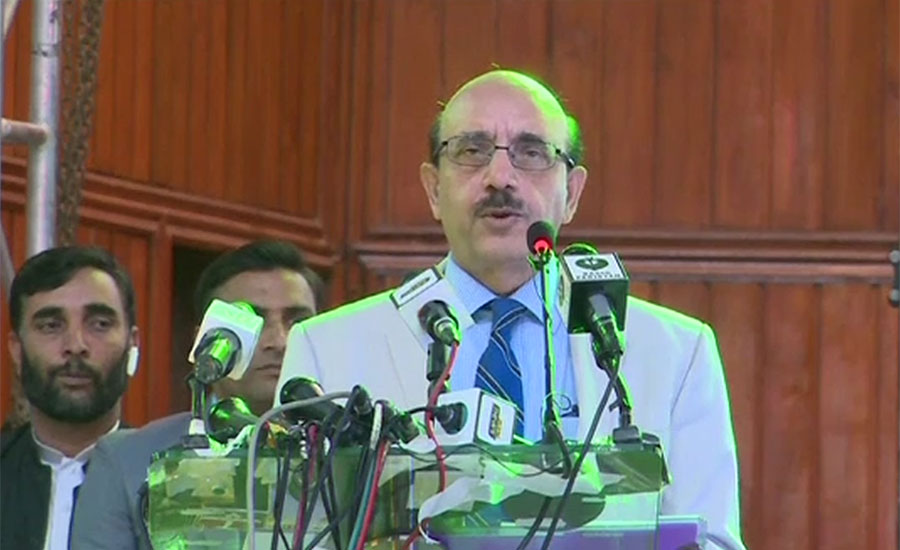 ISLAMABAD (92 News) – Responding to the Indian army chief’s recent threat to attack Azad Kashmir, Azad Jammu and Kashmir (AJK) President Sardar Masood Khan on Friday said that the Occupied Kashmir will turn into graveyard of Indian forces. Addressing at Kashmir Solidarity Youth Convention, the AJK president said Occupied Kashmir would turn into a graveyard burying 900,000 Indian troops who have been perpetuating brutalities against innocent Kashmiris. “Flame India has been stocking in Srinagar will destroy the neighbouring country and its fascist regime. There is a message for the extremist and racist parties of [India] that they would reduce to ashes themselves in this fire,” he said. “When this volcano will erupt, no part of India would remain safe,” President Sardar warned. He also expressed disappointment for the people of the occupied territory have been reeling under an unprecedented siege for the 46th consecutive day, today with hundreds of them taken into custody. The AJP president appreciated the government and people of Pakistan saying they exhibited an exemplary unity following India’s Aug 5 move of revoking the special status of occupied Kashmir. He said world powers openly supported Kashmiris and rejected India’s stance for the first time. Sardar Masood Khan lamented for silence of big powers over the Kashmir issue. He welcomed gratitude to Turkey, China, and other countries for extending support to the people of held Kashmir. Curfew and lockdown continued at 47th consecutive day on Friday (today) in Indian Occupied Kashmir (IoK) from August 5 when Narendra Modi government announced scraping of the special status of Jammu and Kashmir. Residents continue to suffer immensely as the Kashmir valley continues to remain under strict curfew and military lockdown for the 47th consecutive day. The heavy deployment of Indian troops has created an atmosphere of fear, forcing the people to remain indoors. The continued blockade of the valley has aggravated the situation to an alarming proportion. The residents confined to their homes are facing difficulties in meeting their daily needs. The shortage of essential commodities like milk, baby food and life-saving medicines is adding to the miseries of the people and the valley represents a humanitarian crisis.