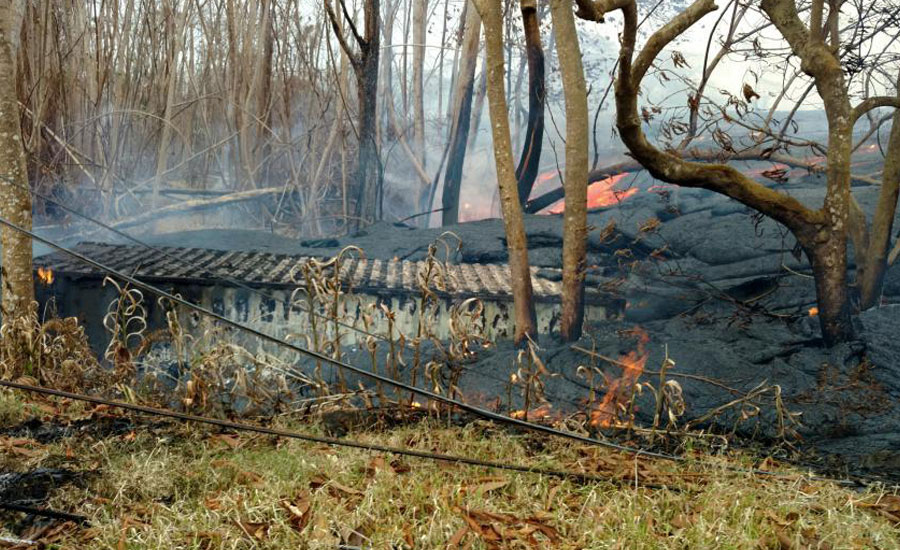 HONOLULU (Reuters) – Lava from Hawaii’s erupting Kilauea volcano is exploding as it pours into the ocean, shooting rock fragments that are a danger to boaters. Inland, where molten rock is burning through jungle, methane explosions are hurling boulders while toxic gas is reaching some of the highest levels seen in recent times. These were new risks geologists warned of on Tuesday as Kilauea’s 19-day eruption showed no sign of easing, with repeated explosions at its summit and fountains of lava up to 160 feet (50 m) from giant cracks or fissures on its flank. Lava edged towards a geothermal power plant on Tuesday after destroying an old warehouse near the facility, County of Hawaii Civil Defense said. Workers at the closed Puna Geothermal Venture, which provided around 25 percent of electricity on Hawaii’s Big Island, worked to cap the last of three pressurized wells to reduce the risk of an uncontrolled release of toxic gases should they be inundated by lava. The race at the site marked the latest challenge facing authorities during what geologists call an unprecedented, simultaneous eruption at Kilauea’s summit and from giant fissures 25 miles (40 km) down its eastern side. “Fissures near Puna Geothermal Venture are active and producing lava slowly flowing onto the property,” Civil Defence said in a statement. “This activity has destroyed the former Hawaii Geothermal Project site,” it said referring to the warehouse. An explosive eruption at the Kilauea summit at 3:45 a.m. (9:45 a.m. EST) sent ash to a height of 8,000 feet (2,438 meters) over Hawaii’s Big Island, civil defense said. Communities southwest of the summit were dusted with ash, said National Weather Service meteorologist John Bravender. On the volcano’s east flank, nearly two-dozen fissures are producing 15,000 tons a day of toxic sulfur dioxide, a level much higher than seen in recent times, Bravender said. The Puna district’s geothermal plant has been closed since shortly after lava began erupting on May 3 through newly opened fissures in the ground running through neighborhoods and roads in an area near the community of Pahoa. About 3 miles (4.8 km) to the east of the plant on the coast, noxious clouds of acid fumes, steam and fine glass-like particles billowed into the sky as lava poured into the ocean from two lava flows. At least 47 homes and other structures have been destroyed by nearly two dozen fissures in the Leilani Estates and Lanipuna Gardens, and a man was seriously injured on Saturday by flying lava. Around two thousand people have been forced to evacuate, and many others have voluntarily left their homes.