NEW YORK (92 News) – Organization of Islamic Cooperation's Contact Group on Kashmir has reaffirmed its complete solidarity with the Kashmiri people in their struggle for the right to self-determination. The OIC Contact Group on Kashmir, which met on the sidelines of the UN General Assembly session in New York, also called for United Nation's probe into the gross human rights violations in Indian-held Jammu Kashmir (IHK). The meeting emphasized that a just settlement of the Kashmir dispute in accordance with relevant UN Security Council resolutions is also a pre-condition for lasting peace in South Asia. In his speech, the Secretary General Organisation of Islamic Cooperation, Dr Yousef Al Othaimeen reiterating OIC’s principled position on Kashmir, called for an immediate cessation of Indian oppression and atrocities in IHK. 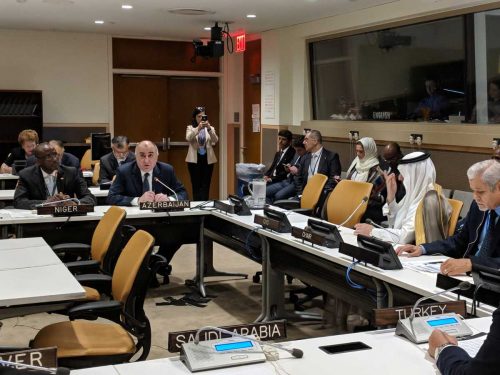 He urged the Indian government to peacefully settle the dispute in accordance with the wishes of the Kashmiri people and the UN Security Council resolutions. The Secretary General condemned the consistent killing of innocent Kashmiri civilians by the Indian occupation forces and the recent escalation in atrocities at the hands of Indian forces. Speaking on the occasion, Foreign Minister Shah Mehmood Qureshi called for establishment of an inquiry commission to probe into the human rights violations in Indian-held Jammu Kashmir. He said India should support the establishment of Inquiry Commission if it has nothing to hide. Shah Mehmood Qureshi said India is subjecting the population of IKH to brutal treatment in the guise of black laws. He also said UN High Commissioner's report on Occupied Kashmir is based on facts. The Foreign Minister also asked India to grant access to OIC Contact Group on Kashmir to visit the occupied territory. Besides others, Azad Jammu and Kashmir President Sardar Masood Khan attended the meeting as the True Representative of Kashmiri People. He gave a detailed overview of the massive violations of human rights and international humanitarian law being carried out by the Indian occupation forces in Occupied Kashmir. He urged the international community to get involved and push for a settlement of the lingering dispute to usher in peace in the region. The AJK president also presented a Memorandum to the OIC Secretary General.