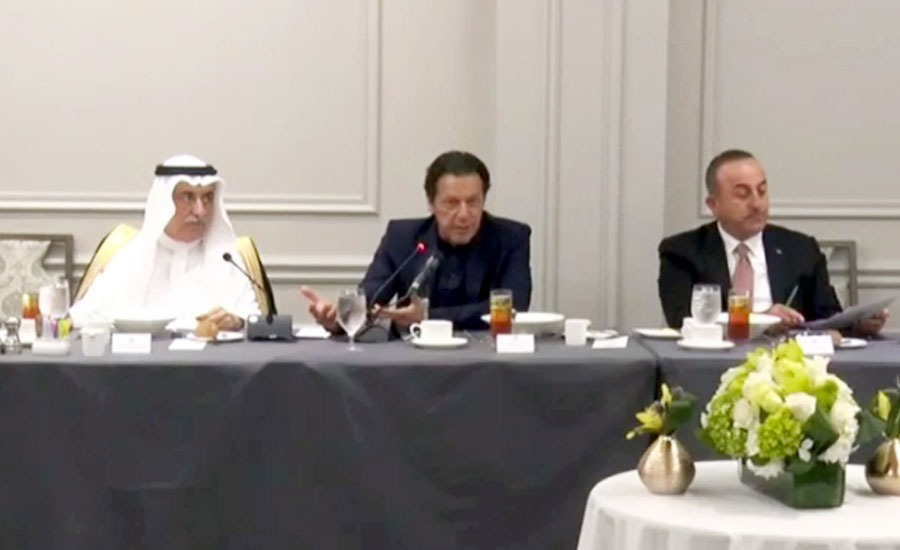 NEW YORK (92 News) – The OIC Contact Group expressed reservations over the worst human rights violation in Indian Occupied Kashmir (IOK). Prime Minister (PM) Imran Khan hosted a dinner in the honor of Delegates of OIC Contact Group on the sidelines of 74th Session of the UN General Assembly (UNGA) in New York. On the occasion, the prime minister said that over eight million innocent Kashmiri people have been made hostage by the Indian forces in occupied Kashmir. PM Khan raised the question that if these people were European then what reaction was to be of the world community. He said that we have to awaken the international community. He said if Kashmiris fight for their right, it is called terrorism and they are being oppressed because they are Muslims. He said that under the curfew there is an imminent risk of genocide of Kashmiri Muslims. He said atrocities being witnessed in the valley were never happened in the past. The prime minister said minorities including Muslims and Christians are not safe and they are being treated as inferior citizens. The event was also attended by Foreign Ministers of Saudi Arabia, Turkey and Azerbaijan.

PM rules out talks with India until Kashmir curfew is lifted

PM Imran Khan said it’s no use negotiating with India until it decides to lift curfew from the Occupied Kashmir (IoK). “We have no knowledge what will happen after curfew is lifted. But, we fear genocide to follow,” Imran Khan said while addressing a news conference along with Foreign Minister Shah Mahmood Qureshi and Pakistan’s Permanent Representative to UN Dr Maleeha Lodhi in New York. The premier has urged the UN and the international community to push India into lifting the siege on Kashmir under which some eight million people are languishing for the past 51 days. He warned the situation could get worse if urgent efforts were not made to resolve the crisis. Expressing his disappointment over the international community’s attitude, the prime minister said there are eleven Security Council resolutions that recognize Kashmir as disputed region and it is not internal matter of India.