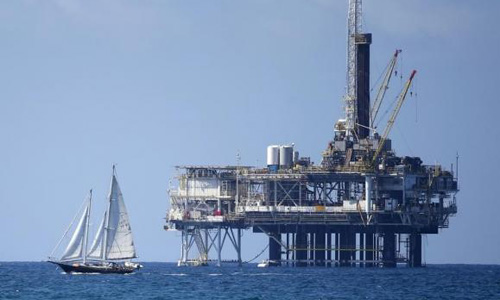 SINGAPORE - Oil prices dropped on Tuesday after activity in China's factory sector fell to an 11-month low and as Saudi Arabia said its production was close to an all-time high. The flash HSBC/Markit Purchasing Managers' Index (PMI) dipped to 49.2 in March, below the 50-point level that separates growth in activity from a contraction on a monthly basis, stoking worries over the strength of the world's No.2 economy. Economists polled by Reuters had forecast a reading of 50.6. That followed an overnight report that Saudi Arabia, OPEC's biggest producer, was now pumping around 10 million barrels of crude oil per day, a near all-time high and some 350,000 bpd above the figure Saudi Arabia gave to OPEC for its February output. "The market was under pressure early in the trading day after comments from Saudi Arabia that it was producing almost 10 million barrels per day," ANZ bank said on Tuesday. Brent crude oil futures LCOc1 were trading down 34 cents at $55.58 a barrel at 0301 GMT. U.S. WTI crude CLc1 dropped 48 cents to $46.97 a barrel. Worries over slowing growth in China's economy as well as high production have contributed to a global surplus in oil supplies. "We expect crude prices to be pressured once again by the weight of some 2 million barrels per day of oversupply in Q2 2015," energy consultancy FGE said in a note on Tuesday. The refinery sector has benefited from cheap oil, which has improved margins for oil products such as diesel or jet fuel. "A sharp decline in crude prices over late 2014 and into January 2015, followed by an extraordinarily cold February (in the United States and parts of Europe), has meant good times for refiners," FGE said, but it added that high refinery margins were unlikely to last. "In H2 2015, we see an oversupplied products market even as crude prices begin to recover. Refinery margins will adjust downwards. - Reuters