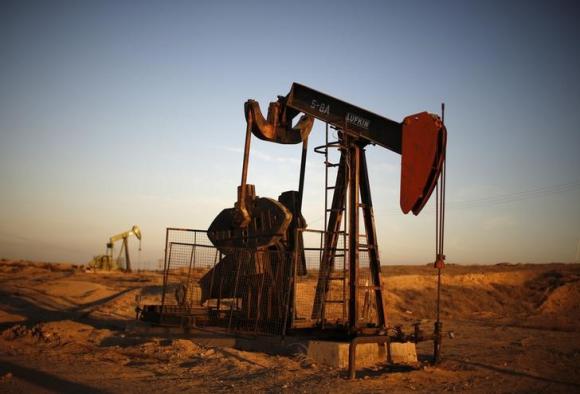 NEW YORK (Reuters) - Crude prices ended mixed on Friday as the number of US rigs drilling for oil fell far less than expected this week, while heating oil jumped 6 percent after severe winter cold crimped output at three refineries. After many bets that crude would rally on Friday from another plunge in the rig count, and short-covering before the expiry of the front-month in West Texas Intermediate (WTI) futures, the action was in refined products instead. News that at least three refineries, accounting for more than two-thirds of the US East Coast's refined output, are being disrupted by single-digit temperatures sent heating oil futures to six-month highs. "It's sell crude, buy products today," said Dominick Chirichella, senior partner at the Energy Management Institute in New York. "The issues with the East Coast refiners have certainly been weighing on the market." WTI's March futures settled down 82 cents at $50.34 a barrel, expiring as the front-month contract. Until two weeks ago, March WTI had the highest ever open interest for a front-month. Market bulls hoping for a further price recovery from oil's crash to near six-year lows had thought the contract would see a last-minute spike in short-covering that would have sent prices soaring. The front-month in benchmark Brent settled just a penny higher at $60.22, after falling to a week low of $57.80 on Thursday. Brent held steady despite data from oil services firm Baker Hughes showing the oil rig count down by just 37, the smallest weekly decline this year. The rigs total itself was at the lowest in more than three years. Oil prices had tended to drop on reports of inventory builds during each week, then rally on the rig count data from Baker Hughes. US heating oil surged more than 6 percent to $2.1368 a gallon on Friday, its highest since early December. Heating oil prices spiked after news that Phillips 66 began experiencing extended delays in restarting a crude unit at its 238,000-barrel-per-day Bayway refinery in Linden, New Jersey, according to person familiar with the facility's operations. In Trainer, Pennsylvania, Delta Air Lines Inc's 185,000-barrel-per-day refinery was hardest hit, cutting back production and shutting its main gasoline-making unit, two people familiar with the plant said.