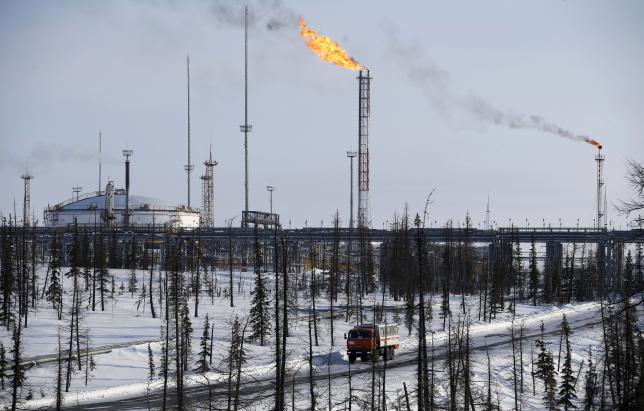 SINGAPORE - Oil futures extended losses on Tuesday, as Iran and six world powers ramped up the pace of negotiations to reach a preliminary deal that could ease sanctions and allow more Iranian crude onto world markets. With a deadline less than 24 hours away, United States, Britain, France, Germany, Russiaand China were trying to break an impasse in negotiations aimed at stopping Iran from having the capacity to develop a nuclear bomb, in exchange for an easing of international sanctions. Officials said talks on a framework accord, which is intended as a prelude to a comprehensive agreement by the end of June, could yet fall apart over disagreements on enrichment research and the pace of lifting sanctions. "Iran has built up significant oil inventories and could immediately increase exports if sanctions are lifted," analysts at ANZ said in a note. Shipping sources say Iran is storing at least 30 million barrels of oil on its fleet of supertankers, as Western sanctions keep a lid on sales. Brent oil LCOc1 was 35 cents lower at $55.94 a barrel by 0244 GMT. The contract had settled down 12 cents on Monday. US crude CLc1 was down 56 cents at $48.12 a barrel, after closing 19 cents lower. A stronger US dollar also weighed on oil prices. A firm greenback makes dollar-denominated commodities costlier for holders of other currencies. [USD/] IRAN OIL PRODUCTION Iran could increase oil production by some 500,000 barrel a per day (bpd) in three to six months if sanctions are removed, and by an additional 700,000 bpd within another year, according to estimates by Facts Global Energy. "Iran will be very reluctant to accept a lower quota given that it has given up so much production due to sanctions," the consultancy said in a note. Hedge funds, however, increased their bets on rising Brent prices last week to their highest since July 2014, exchange data showed. This was probably due to spread plays between the North Sea contract and its US rival, traders said. Short positions in US crude have risen to a record high as traders bet record crude stocks in the United States will keep it under pressure relative to Brent. US commercial crude oil stocks are likely to have risen by 4.2 million barrels last week to a record high for a 12th week, a preliminary Reuters poll showed ahead of weekly data by the American Petroleum Institute later in the day. [EIA/S] - Reuters