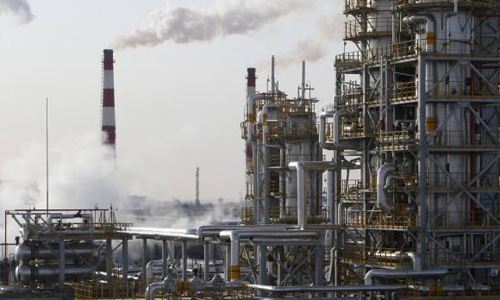 NEW YORK (Reuters) - Crude oil futures fell more than 2 percent on Monday as investors worried about oversupply and a strong dollar, but heating oil futures jumped 5 percent due to operational problems at major US refineries. Crude was down for almost the whole trading session, rising briefly after the Financial Times quoted Nigerian Oil Minister Diezani Alison-Madueke as saying the country might call for an OPEC extraordinary meeting in the next six weeks or so if prices fell further. The market has slid since Friday's data showing a slowdown in the weekly decline in the number of rigs drilling for oil in the United States. The data raised worries that US crude inventories, already at record highs, could swell further. The largest US refinery strike in 35 years has also been a negative for crude prices. Heating oil futures HOc1 rallied for a second straight day, reaching above $2.24 a gallon, the highest in nearly three months, as some of the biggest US East Coast refineries struggled to restore operations after severe cold weather triggered outages. Sub-zero temperatures were expected to sweep through the region late on Monday, raising concerns about adequate heating supplies. "It's a worry of high supplies with crude and tight supplies with heating oil," said Gene McGillian, senior analyst at Tradition Energy in Stamford, Connecticut. Benchmark Brent crude LCOc1 settled down $1.32 at $58.90 a barrel Brent briefly rose, hitting a session high of $60.67, after the comments by the Nigerian minister, Alison-Madueke, who is also OPEC's president. Analysts said the gambit will likely fail without Saudi Arabia's support. US crude futures CLc1, also known as West Texas Intermediate, or WTI, settled down $1.36, or 2.7 percent, at $49.45 a barrel. While high supply was pressuring crude prices, the market also was seeing quick "buying on dips," evidence that bulls were in more control than a few months ago, traders said. After losses of between 9 and 18 percent each month from October to December, Brent consolidated in January and is up about 11 percent month-to-date. "There is the notion that a bottom has been set at $55 for Brent and $45 for WTI, and there are enough buyers out there each time the market tests those levels," said John Kilduff, partner at New York energy hedge fund Again Capital.