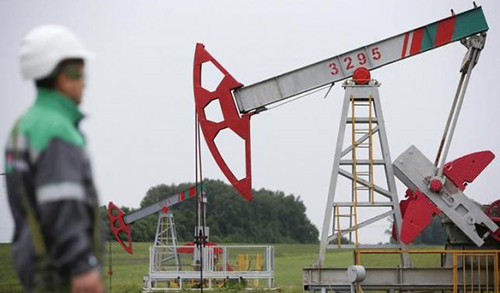 TOKYO - Crude futures dipped in Asian trading on Friday on renewed concerns about a global oil glut, but losses were capped by slightly better than expected Chinese economic data reflecting government efforts to stabilize growth. Brent crude futures were down 16 cents at $47.21 a barrel at 0327 GMT. On Thursday they rose 2.4 percent, supported by short covering, and were on track to rise about 0.3 percent this week. US West Texas Intermediate (WTI) futures were down 18 cents at $45.50 a barrel having earlier fallen to $45.05. The contract rose 2.1 percent in the previous session and is heading for a weekly gain of 1.1 percent. Prices partly retraced their losses after China reported economic growth of 6.7 percent in the second quarter from a year earlier. The result was steady from the first quarter and slightly better than expected as the government stepped up efforts to stabilize growth in the world's second-largest economy. While fears of a hard landing in China have eased, investors are concerned a further slowdown and any major fallout from Britain's decision to leave the EU earlier this month would leave the world even more vulnerable to the risk of a global recession. At the same time, persistent oversupply of crude oil is not clearing as early as many had expected, reports from the International Energy Agency and the US official energy think tank showed this week. "Changes to our oil balances and OPEC crude oil production assumptions continue to show that very little implied global stock change will occur from Q3 2016 until the end of 2017," BNP Paribas said in a research note, which updated its scenarios for supply and demand. "As such, the inventory overhang built from the start of 2014 will remain largely in place, and thus continues to represent an impediment to any price rally," BNP said. Data on Thursday from market intelligence firm Genscape showed a 171,511-barrel build at the Cushing, Oklahoma delivery hub for WTI futures during the week to July 12, traders said. -Reuters