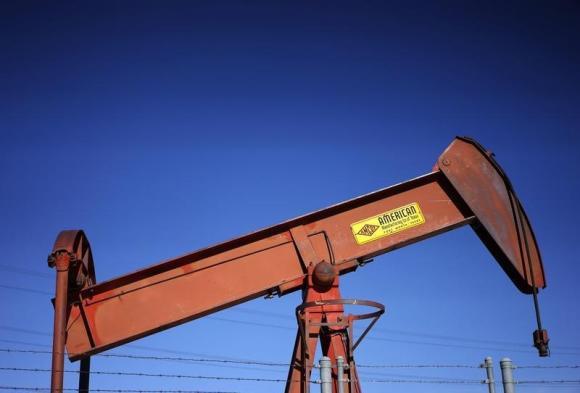 NEW YORK - Oil closed lower on Thursday in volatile trade, as a soaring dollar and the US pursuit of an Iranian nuclear deal offset earlier gains from supply concerns in Libya and Iraq. Libya's declaration of force majeure on nearly a dozen of its oilfields due to security concerns and arson attacks by Islamic State militants on Iraqi oil wells helped prices climb during the European session. In New York trade, the market came off its highs after the dollar hit 11-1/2 year highs against the euro, weighing on oil prices denominated in the greenback. Washington's pursuit of a nuclear agreement with Tehran, which could end sanctions against Iran and bring more oil from the OPEC member into an already flooded market further dragged on prices. Even so, market bulls convinced oil had hit a bottom after the June-January selloff that had knocked 60 percent off prices stepped in to prevent a sharp slide in Thursday's session. Those betting on a "blowout" in the spread between benchmark Brent oil and US crude added to the market's volatility, traders said. Brent LCOc1 settled down 7 cents at $60.48 a barrel, after rallying more than $1 earlier. US crude CLc1 finished down 77 cents at $50.76, after rising to $52.40 earlier. "It was extremely choppy day in oil, which shouldn't have been the case, given there were overwhelmingly bearish factors compared to positive," said Tariq Zahir, managing member at Tyche Capital Advisors in Laurel Hollow in New York. The dollar tumbled against the euro after European Central Bank chief Mario Draghi left the door open for asset purchases beyond September 2016. US Secretary of State John Kerry said a nuclear deal with Tehran would address security concerns of Gulf Arab countries, but added that Washington was not seeking a "grand bargain" with Iran, a reference to wider political and security cooperation. Weaker-than-expected US jobless claims and factory orders and a drop in nonfarm productivity were other negatives for oil. Brent's premium to US crude CL-LCO1=R, which stood at a 13-month high of $13 a barrel on Friday, narrowed to below $9 on Wednesday after government data showed lower-than-expected crude builds in the Cushing, Oklahoma delivery hub for US oil. But a new estimate on Thursday from market data research firm Genscape suggested that Cushing builds could be swelling again, widening Brent's premium to near $10. –Reuters