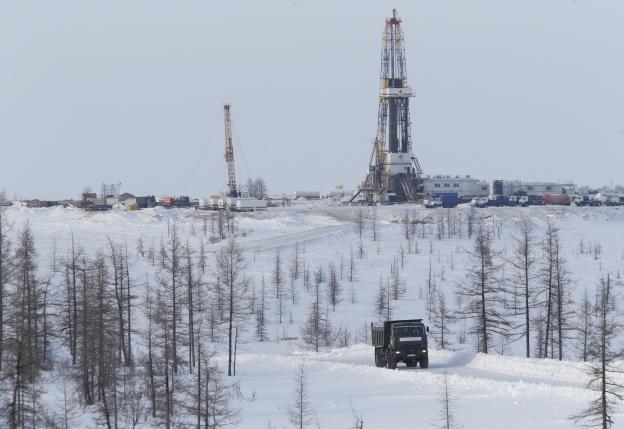 LONDON - Oil prices fell more than 3 percent on Thursday as officials from the big global powers stayed locked in nuclear talks with Iran that, if successful, could allow the Islamic state to release more crude oil onto world markets. Negotiations on Tehran's disputed nuclear program have stretched well beyond a self-imposed March 31 deadline, with diplomats saying the chances of a preliminary accord in the next few hours are finely balanced. Tehran is hoping for a deal that will end crippling economic sanctions and allow it to sell millions of barrels of oil, some of it stored at sea in supertankers and ready for delivery. Brent crude for May slumped $2.23, or 3.9 percent, to a low of $54.87 a barrel before rallying to around $55.50 by 1210 GMT (0810 EDT). The contract settled $1.99 higher on Wednesday. US crude for May was down $1.15 at $48.94 a barrel, after closing up $2.49, or 5.2 percent, on Wednesday. Iranian Foreign Minister Mohammad Javad Zarif said "significant progress" had been made at the talks in the Swiss city of Lausanne, but more time was needed to reach a deal on how to resolve a 12-year standoff over Tehran's nuclear plans. "We don't know what exactly is happening in the nuclear talks but the chances of a deal of some sort look quite high," said Eugene Weinberg, head of commodities research at Commerzbank in Frankfurt. "Investors seem to have taken a view that there will be a deal and the market is already oversupplied," Weinberg added. The format of any deal was unclear: "(I expect) nothing beyond a general statement of intentions to keep talks going through Spring," Scott Lucas of EA WorldView, a specialist website, told Reuters Global Oil Forum. Also putting pressure on oil prices was news that Russian oil production hit the latest in a line of post-Soviet highs in March, feeding higher exports that are adding to a global glut. State energy giants Gazprom and Rosneft brought Russia's oil output to a post-Soviet era record of 10.71 million barrels per day (bpd) in March, Energy Ministry data showed on Thursday. By contrast, the US Energy Information Administration (EIA) said on Wednesday that US oil production dropped last week for the first time since late-December. - Reuters