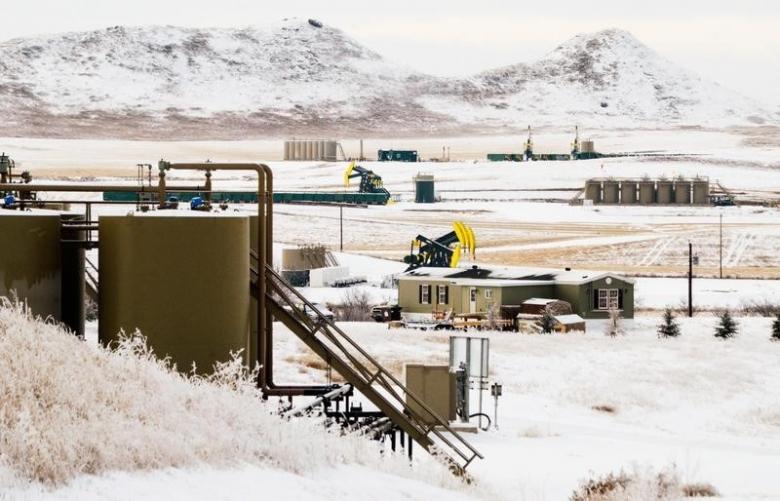 NEW YORK – Crude oil prices fell 2 percent on Friday to multi-week lows as swelling Iranian exports reinforced fears of a global glut, while gasoline rallied on refinery and pipeline outages.
Falling U.S. equity markets and a rising dollar also weighed on crude futures and other commodities denominated in the greenback. [.N] [FRX/] Gasoline rose 2 percent after outages on Colonial Pipeline's main gasoline line and in a key unit of BP Plc's refinery in Whiting, Indiana. The profit for turning crude into gasoline hit three-month highs and pump prices for the fuel rose as well. Brent crude futures settled down 82 cents, or 1.8 percent, at $45.77 a barrel, hitting a two-week bottom of $45.48. U.S. West Texas Intermediate crude futures fell 88 cents, or 2 percent, to settle at $43.03 a barrel. WTI hit a five-week low of $42.74. For the week, Brent fell 5 percent, while WTI lost 6 percent. "Crude futures are taking on an increasingly bearish appearance," said Jim Ritterbusch of Chicago-based oil markets consultancy Ritterbusch & Associates. For WTI, "this can potentially expedite our expected trip south to the $39 area," he said. Oil slumped after a source familiar with Iran's tanker loading schedules said the third-biggest OPEC producer raised crude exports to more than 2 million barrels per day (bpd) in August, nearing pre-sanctions levels. Iran and OPEC kingpin Saudi Arabia have been raising exports despite the approaching Sept. 26-28 meeting in Algeria, where the Organization of Petroleum Exporting Countries and other major producers are set to discuss an oil production freeze. Most market participants are skeptical a deal will be reached. There are also signs of returning output from Nigeria and Libya, where crude exports have been hampered by conflict and unrest. U.S. oil output, meanwhile, has grown more than that of any producer since 2010, data shows. A weekly reading on the U.S. oil rig count showed a rise for the 11th out of the last 12 weeks. The rally in gasoline picked up on news BP Plc plans to shut for up to 10 days the large crude distillation unit at its 413,500-bpd Whiting, Indiana refinery. That would add to closure of the refinery's gasoline-producing fluidic catalytic cracking unit. Analysts expect gasoline pump prices to continue rising in the coming days after Colonial Pipeline Co [COLPI.UL] said it was aiming for a restart by Thursday of its key line that brings gasoline to the East Coast. –Reuters