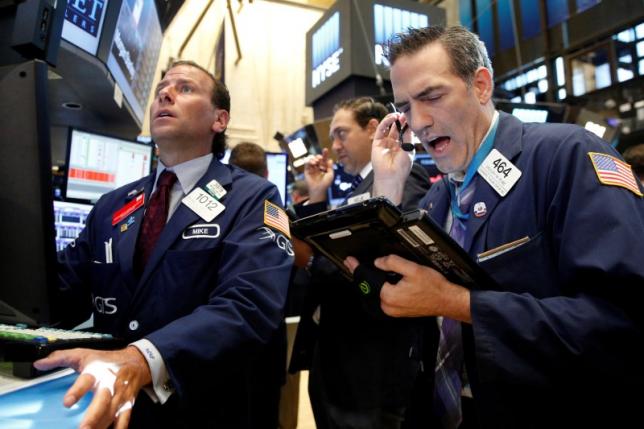 NEW YORK – The S&P 500 and the Dow were lower on Friday following weak economic data and poor earnings from oil majors Exxon (XOM.N) and Chevron (CVX.N). However, a surge in Alphabet (GOOGL.O) and Amazon.com's (AMZN.O) shares kept the Nasdaq in positive territory. Investor sentiment was dented by a slower-than-expected growth in U.S. gross domestic product. Exxon shares fell 4 percent after the oil producer reported a lower-than-expected quarterly profit. Fellow Dow component Chevron shed 2 percent after posting its biggest loss since 2001. The two stocks were the biggest drags on the S&P and the Dow. "There is nothing in the markets to be excited about and we are at all-time highs, which is not justified," said Phil Davis, chief executive officer of PSW Investments. "Its going to be a very low volume day today because there are simply no buyers in the market. The S&P 500 is currently trading at about 17.4 times expected earnings, above the 10-year median of 14.7 times, according to Thomson Reuters StarMine. At 9:34 a.m. ET, the Dow Jones Industrial Average .DJI was down 31.81 points, or 0.17 percent, at 18,424.54. The S&P 500 .SPX was down 0.43 points, or 0.02 percent, at 2,169.63. The Nasdaq Composite .IXIC was up 8.52 points, or 0.17 percent, at 5,163.50. Five of the 10 major S&P 500 indexes were lower, with the energy sector .SPNY dropping the most by 1.13 percent. Google's parent Alphabet surged 3.5 percent to $794.94 after the company's second-quarter earnings handily beat analysts' estimates. The stock was the top percentage gainer on all three indexes. Amazon.com touched a record high of $766 after the online retailer posted strong results and gave an upbeat forecast for the current quarter. Wynn Resorts (WYNN.O) dropped 6 percent after the company announced a smaller-than-expected allocation of new tables for its new $4.2 billion casino in Macau. Merck (MRK.N) rose 1 percent to $59.05 after the drug maker's second-quarter profit and revenue beat estimates. Advancing issues outnumbered decliners on the NYSE by 1,305 to 1,266. On the Nasdaq, 1,146 issues fell and 1,014 advanced. The S&P 500 index showed 10 new 52-week highs and one new low, while the Nasdaq recorded 30 new highs and nine new lows. –Reuters