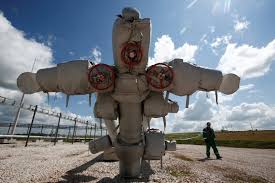 SINGAPORE (Reuters) – Oil prices eased on Friday as Russia hinted it may gradually increase output, after having withheld supplies in concert with producer cartel OPEC since 2017. Brent crude futures LCOc1 were at $78.69 per barrel at 0208 GMT, down 10 cents from their last close, and more than 2.2 percent below the $80.50 November 2014 high they reached on May 17. Brent broke through $80 for the first time in more than three years earlier in May. US West Texas Intermediate (WTI) crude futures were at $70.62 a barrel, down 9 cents from their last settlement. “Oil prices are now starting to drift a little,” said Greg McKenna, chief market strategist at futures brokerage AxiTrader, adding that this was due to OPEC’s and Russia’s “moves toward an increase in production at the June meeting”. The Middle East dominated Organization of the Petroleum Exporting Countries (OPEC) as well as a group of non-OPEC producers led by Russia started withholding output in 2017 to tighten the market and prop up prices. But Russia, in particular, has been floating a potential end to the production cuts, with energy minister Alexander Novak saying on Thursday that restrictions on oil production could be eased “softly” if OPEC and non-OPEC countries see the oil market balancing in June. “The Russians have always struck me as production cut tourists keen to get off the boat and crank up production as soon as inventories were stabilized and prices once again elevated ... That possibility is top of the mind for traders and as a result oil prices are slipping,” McKenna said. While Russia and OPEC benefit from higher oil prices, which have risen by almost 20 percent since the end of last year, their voluntary production cuts have opened the door to other producers to ramp up output and gain market share. US crude oil production C-OUT-T-EIA has risen by more than a quarter in the last two years, to 10.73 million barrels per day (bpd). Only Russia produces more, at around 11 million bpd. Output by producers like the United States, Canada or Brazil who are not bound by the OPEC/Russian led agreement to cut, will likely rise further as higher crude prices improves their profitability. “With oil prices rising more than costs, average industry profitability has turned positive this year,” Bernstein Energy said in a note this week, adding that the 50 largest listed oil companies globally “need $47 per barrel oil prices to break even in aggregate.”