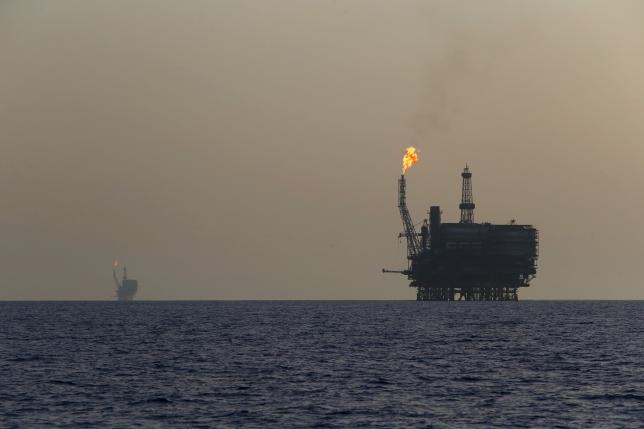 SINGAPORE - Oil prices fell to near six-year lows on Monday as Japan's economy contracted and producers in the United States added drilling rigs for a fourth straight week despite a recent rout in prices. Japan's economy, the second biggest in Asia and No.3 in the world, shrank in the second quarter from a year earlier, adding to fears that slowdowns in Asia's biggest economies will weigh on oil demand. U.S. crude, or West Texas Intermediate (WTI), was trading 58 cents lower at $41.92 a barrel at 0423 GMT, close to more than six-year lows. Brent futures were down 54 cents at $48.65 a barrel, still some way from their 2015-low of $45.19. U.S. energy firms added oil rigs for a fourth straight week to the highest number since early May, data from energy services firm Baker Hughes Inc showed. The increase likely reflected how a period of stable prices earlier this summer, when U.S. oil traded above $60 a barrel, lulled some firms into stepping up spending. "The recent recovery in the oil rig count supports our expectation that U.S. producers can and will ramp up activity with WTI prices near $60 a barrel, given improved returns with costs down 30 percent," analysts at Goldman Sachs said in a note to clients. Citigroup Inc lowered its crude oil price outlook citing weak market fundamentals, including an increased supply from OPEC and challenging demand growth in China and emerging markets. The Wall Street bank lowered its base case Brent price forecasts to $54 per barrel for 2015 and $53 in 2016 from $58 and $63 respectively. It also lowered its 2015 and 2016 price forecast for U.S. oil to $48 per barrel both this year and in 2016 from its prior view of $53 and $56, respectively. Oil producers in the United States will be granted an additional market outlet, after the Obama administration approved limited crude sales to Mexico for the first time. Despite limited volumes of about 100,000 barrels per day, the move toward freeing up trade will please U.S. oil producers, which say the restrictions force them to sell oil at below global market rates as the shale oil boom created a glut of light crude. But analysts at Barclays don't expect the ruling to lead to the removal of a decade-old export ban. Rather, it may mark the last of a number of steps already taken as they expect the administration "to stress that its overarching position on a broad removal of the ban has not changed". "We believe that this ruling means that - absent Congressional action - this administration remains reticent to approve a change to the law," they said. -Reuters