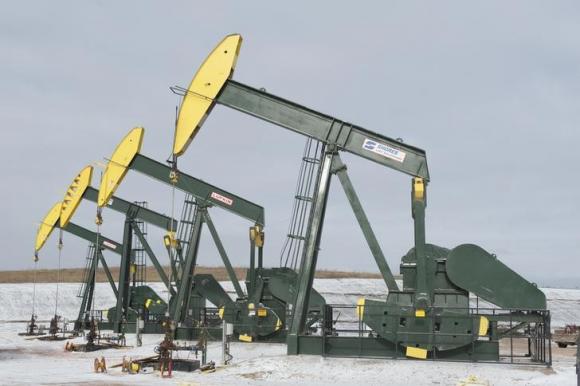 SINGAPORE - Oil prices fell sharply in early Asian trade on Monday, with US crude dropping more than 2 percent to a six-year low after the dollar hit fresh highs and concerns grew that the United States might run out of oil storage. Both US crude and Brent have dropped steeply this month on a stronger dollar and worries over an oil supply glut. US crude fell to $43.57, the lowest since March 2009, while Brent slipped to $53.34 in early trading on Monday after the dollar index closed above 100 on Friday for the first time since April 2003 to hit fresh 12-year highs. By 2330 GMT, US crude was down 93 cents, or 2.1 per cent, at $43.91 a barrel, and Brent was down 97 cents at $53.70 a barrel. The Fed's policy-setting committee meets this week with the expectation that it could tighten monetary policy as soon as June. "We expect the dollar to remain firm ahead of Wednesday night's US Federal Reserve policy meeting," ANZ analysts in a note on Monday. A stronger greenback makes commodities denominated in the dollar more expensive for holders of other currencies. "Bearish comments from the International Energy Agency that the US might soon run out of empty tanks to store crude and a suggestion that global supply was up 1.3 million barrels per day in February year on year at 94 million barrels weighed on sentiment," ANZ analysts said. – Reuters