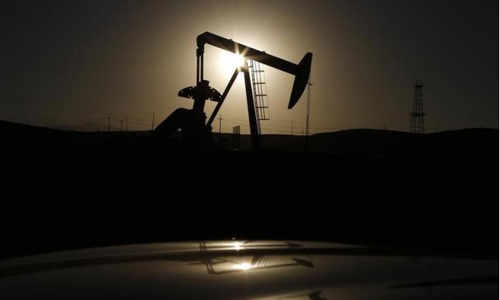 SINGAPORE - Oil futures edged lower on Wednesday amid speculation that a last-minute deal over Iran's nuclear program would be reached that could allow more Iranian crude onto world markets. Talks between Iran and six world powers to settle a dispute around Tehran's nuclear program extended beyond a Tuesday deadline, as the parties edged towards a deal but failed to agree to crucial details such as the lifting of UN sanctions. Efforts to reach a framework deal were scheduled to continue on Wednesday in the Swiss city of Lausanne. Russian Foreign Minister Sergei Lavrov said a general agreement had been reached over all key aspects of a future deal, TASS news agency quoted him as saying. A diplomat, speaking on condition of anonymity, later denied that an agreement had been reached. Talks had appeared to bog down, after the United States warned that it was ready to abandon the talks altogether and Iran affirmed its "nuclear rights", with officials cautioning any agreement would probably be fragile and incomplete, "Whether or not there is an Iranian nuclear deal, we do not expect a flood of oil into the market as a consequence," head of commodity markets strategy and oil strategy at BNP Paribas, Harry Tchilinguirian, told Reuters Global Oil Forum. "Which sanctions will be lifted and the uncertainty in the timing of lifting suggest that Iranwill not be in position to significantly add to the current oversupply in the market," he said. Brent crude for May delivery was down 8 cents at $55.03 a barrel by 0201 GMT, after settling down $1.18 on Tuesday. The contract had fallen 8 percent over the last week amid expectations of a nuclear deal. US crude for May delivery was trading 25 cents lower at $47.35 a barrel, after settling down $1.08. Higher OPEC supply also put pressure on oil prices, after a Reuters survey showed the oil cartel increased supply in March to its highest since October as Iraq's exports rebounded after bad weather and Saudi Arabia pumped at close to record rates. Higher Libyan exports could also add to a glut on world markets, after the state oil company said Libya two biggest oil ports, Ras Lanuf and Es Sider, will be able to open once security checks are made. - Reuters