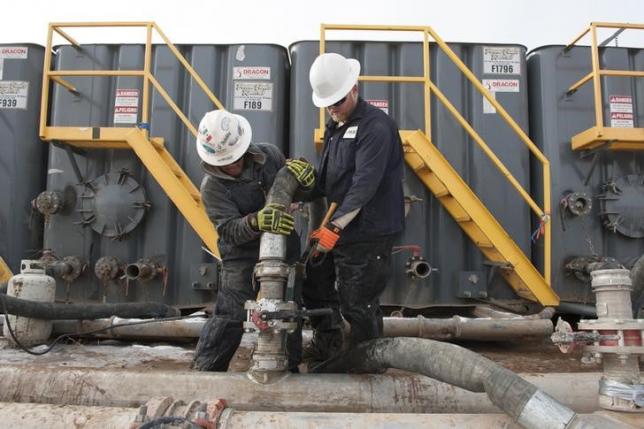 SINGAPORE – (Reuters) - Oil prices fell on Monday, extending steep losses from the previous session, as Iran and six world powers tried to reach a deal that could add oil to the market if sanctions against Tehran are lifted. The two sides tried to break an impasse in nuclear negotiations on Sunday ahead of a deadline to find a preliminary agreement by Tuesday, exploring compromises in a number of areas. Benchmark Brent crude futures had dropped to $56.04 by 0320 GMT, down 37 cents after falling 5 percent on Friday as the market began to price in the possibility of a deal with Iran. Front-month US West Texas Intermediate (WTI) futures were down 76 cents to $48.11 a barrel. "Any relaxation of Iran oil sanctions could see increased exports adding to swelling global supplies and further pressuring prices," ANZ bank said on Monday. Singapore-based brokerage Phillip Futures said that it expected oil prices to fall further in the second quarter, which begins in April. "We expect Brent and WTI to bottom out at $50-53 and $46-48 respectively," it said, adding that strong US output, a return of Libyan production and weak economic data, especially from Japan and China, could further delay rising prices. Morgan Stanley said that the crude demand outlook would also be dented via the refinery sector, where production tends to fall towards the middle of the year. "By summer, high (refinery) runs and seasonally weak product demand could lift product stocks and weigh on demand and prices," it said. In the United states, the oil rig count continued to fall as producers adjust to lower prices, although analysts said that lower drilling activity would only affect oil production later this year. "The current rig count is pointing to US production declining slightly sequentially in 2Q15 and 3Q15," Goldman Sachs said. Yet Goldman said that drilling could bounce back in 2016. "US producers are preparing to ramp up activity later this year by successfully raising equity and building an uncompleted well war chest. Coupled with the large availability of external capital, this leaves risk to our $65 per barrel 2016 forecast skewed to the downside as these assets will quickly be deployed in a lower cost environment," the bank said. Energy consultancy Wood Mackenzie said exploration costs were set to fall by a third and that 2016 could see drilling activity bounce back to 2014 levels. –Reuters