Oil prices fall as US crude production hits another record 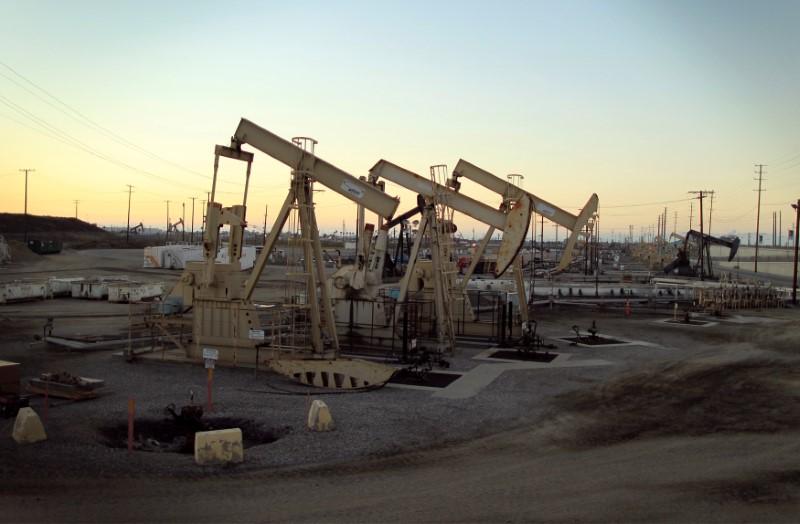 Oil prices fall as US crude production hits another record

SINGAPORE (Reuters) - Oil prices eased on Thursday, dragged down by rising output, although strong demand and a drop in US fuel inventories provided the market with some support. Brent crude futures LCOc1, the international benchmark for oil prices, were at $76.46 per barrel at 0046 GMT, down 28 cents, or 0.4 percent, from their last close. US West Texas Intermediate (WTI) crude futures CLc1 were at $66.58 a barrel, down 6 cents from their last settlement. Prices were pulled down by another rise in US oil production C-OUT-T-EIA, which hit a weekly record of 10.9 million barrels per day (bpd) last week, according to the Energy Information Administration (EIA) . US crude output has risen by almost 30 percent in the last two years, and it is now close to top global producer Russia, which produced 11.1 million bpd overall in the first two weeks of June. But the rising output came amid strong demand, which traders said prevented crude prices from falling further. US consumption of gasoline in the United States rose to an historic high of 9.88 million bpd last week, according to the EIA. In part because of strong demand, US crude inventories C-STK-T-EIA fell by 4.1 million barrels in the week to June 8, to 432.4 million barrels. Still, US output is now above that of top exporter Saudi Arabia, which currently churns out slightly above 10 million bpd.

The surge in American output puts pressure on other producers, who are losing market share. Russian and Saudi production has been held back voluntarily since 2017, when the Organization of the Petroleum Exporting Countries (OPEC), together with some non-OPEC producers including Russia, started supply cuts aimed at propping up prices. With Brent prices up by around 180 percent from their 2016 lows and demand strong, OPEC and Russia may soon end their voluntary supply cuts. OPEC, together with Russia, will officially meet in Vienna on June 22 to discuss its production policy, US bank Morgan Stanley said OPEC and its partners had “largely achieved their stated objective of rebalancing the oil market.” With demand for oil strong, Morgan Stanley said the group’s “production is likely to creep higher.” OPEC’s de-facto leader Saudi Arabia and Russia will also have the chance to talk before the Vienna meeting. Russia and Saudi Arabia are set to open the football world cup, which kicks off in Russia on Thursday. “The two producers’ ministers plan to discuss the issue during tomorrow’s World Cup game between the two countries,” ANZ bank said.