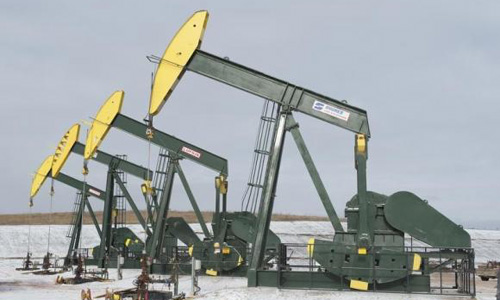 NEW YORK - U.S. crude futures settled more than 1 percent higher on Monday, boosted by a falling dollar that outweighed pressure on prices from a global supply glut. "The dollar is under pressure, and we saw buyers coming into the market as a result," said Tradition Energy senior analyst Gene McGillian. U.S. crude futures settled 88 cents up at $47.45 on Monday, a 1.9 percent climb. The price of Brent rose more than 1 percent to settle up 60 cents at $55.92 per barrel. Oil got a boost as the U.S. dollar fell further, adding to its steepest weekly drop in 3-1/2 years. Market watchers have been unwinding long dollar positions since the Federal Reserve indicated last week that a U.S. interest rate hike is likely to come later rather than sooner. Oil prices were pressured as Saudi Arabia has stood firm on its decision to maintain production levels, saying it would consider cutting output only if producers outside OPEC also did so. Saudi Oil Minister Ali al-Naimi said the kingdom was now pumping about 10 million barrels per day, which could indicate an increase of 350,000 bpd over its February production. Barclays analysts forecast on Monday that if OPEC production holds near current levels of almost 30 million bpd, the market surplus would expand from 900,000 bpd to 1.3 million bpd. Houston-based Schlumberger Ltd, the world's top oilfield services provider, said oil prices could increase in the second half of the year as it expected global industry spending on exploration and production to drop 10 percent to 15 percent in 2015. China's February crude oil imports from Iran fell 3.7 percent from a year earlier to 2.04 million tonnes. China boosted overall imports late last year, taking advantage of cheap oil to build its reserves, but storage tanks could be reaching their limits, forcing a slowdown in orders. - REUTERS