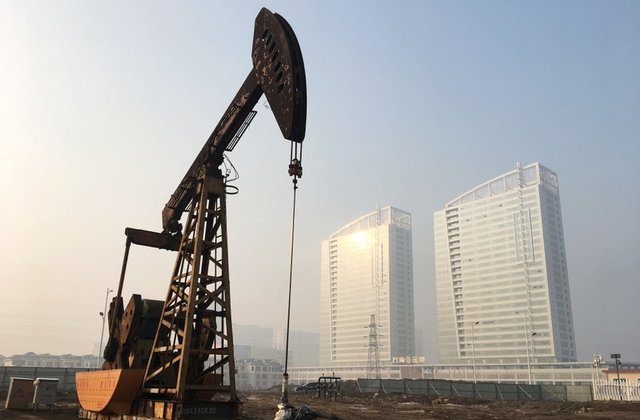 SINGAPORE (Reuters) - Oil prices slipped on Tuesday as concerns that an economic slowdown may curb fuel demand growth overshadowed the reintroduction of sanctions on Iran. US West Texas Intermediate (WTI) crude futures CLc1 were at $62.93 a barrel at 0131 GMT, down 17 cents, or 0.3 percent, from their last settlement. International Brent crude oil futures LCOc1 were down 21 cents, or 0.3 percent, at $72.96 a barrel. Analysts said expectations of an economic slowdown in coming months was outweighing supply-side risks to crude markets from the reintroduced US sanctions against Iran. Hedge fund managers were net sellers of petroleum-linked futures and options for a fifth week running last week as concerns about sanctions on Iran evaporated and investors refocused on economic worries. The net long position in the six most important petroleum-linked futures and options contracts was cut by a further 73 million barrels in the week to Oct. 30. Portfolio managers have been net sellers of 371 million barrels since the end of September, taking their net long position to the lowest level for 15 months, according to records published by regulators and exchanges. Jameel Ahmad, head of market research at futures brokerage FXTM said the “sanctions on Iran have been priced into the oil markets a long time ago”, and that he would “instead focus more heavily on the global demand outlook because of the ongoing external uncertainties weighing down on economic prospects.” Ahmad added that he saw a slowdown in economic and fuel demand growth as “more of a risk for oil over the coming months.” Currency weakness is putting pressure on key growth economies in Asia, including India and Indonesia. At the same time, the trade dispute between the United States and China is threatening growth in the world’s two biggest economies. On the supply-side, oil is in ample availability despite the sanctions against Iran. Washington has granted 180-day exemptions to eight importers - China, India, South Korea, Japan, Italy, Greece, Taiwan and Turkey. These are also Iran’s biggest buyers, meaning Iran will be allowed to still export some oil for now. At the same time, output from the world’s top-three producers, Russia the United States and Saudi Arabia, is rising. Output from these three countries in October exceeded 33 million barrels per day (bpd) for the first time, meaning they alone meet more than a third of the world’s almost 100 million bpd of crude oil consumption.