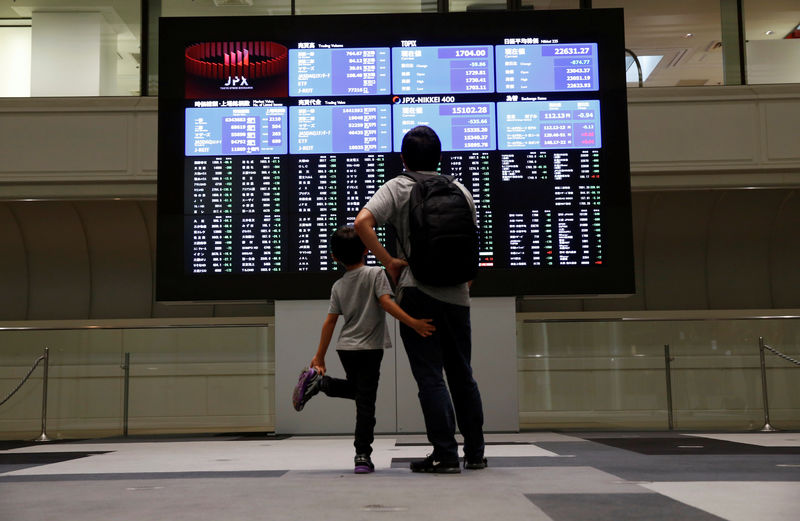 SYDNEY (Reuters) - Asian shares bounced from last week’s steep declines on Monday, though sentiment remained fragile amid heightened worries about corporate earnings and a slowdown in global economic growth. Wider sentiment in markets has been hit by a range of negative factors from an intensifying China-US trade conflict to worries about US corporate earnings to Italian budget woes as well as Federal Reserve rate increases. MSCI’s broadest index of Asia-Pacific shares outside Japan .MIAPJ0000PUS gained 0.4 percent after sliding almost 4 percent last week. Among emerging markets, Brazilian-linked stocks got a lift from the South American country’s presidential election, which saw the victory of far-right candidate Jair Bolsonaro whose campaign centered on promises to clean up politics and crack down on crime. Japan's Nikkei rallied 1 percent while Australian shares climbed 0.8 percent. South Korea's KOSPI added 0.7 percent. E-Mini futures for the S&P 500 ESc1 and Dow minis 1YMc1 were also 0.3 percent higher each after a tumultuous week on Wall Street. Chinese shares, however, bucked the trend with the blue-chip CSI 300 index down 0.9 percent. Hong Kong's Hang Seng index jumped 0.7 percent. Analysts warn of more volatility after heavy losses across major equity indices left investors with negative returns for the year. Bears are on the rise, with some indices already in official correction territory amid heightened worries over corporate earnings and global growth. “Sentiment is going to continue to dominate market direction in the short term and investors will be paying close attention to the newswires in the weeks ahead,” said Nick Twidale of Rakuten Securities Australia in Sydney. “Earnings season continues and political tensions in the United States, Italy, Germany and the UK will continue to add to volatility in their respective markets as well as contributing to overall global flows,” Twidale added. The S&P 500 ended at its lowest level since early May and flirted with correction territory, pressured by heavy losses in technology and internet shares. Data out last week showed US economic growth rose at an annualized rate of 3.5 percent in the third quarter, from 4.2 percent in the second quarter, with the slowdown partly driven by a tariff-related drop in soybean exports. Poor economic indicators from China recently are also likely to weigh further on investor sentiment. Data out over the weekend showed profit growth at China’s industrial firms slowed for the fifth consecutive month in September as sales of raw materials and manufactured goods further ebbed. The Australian dollar , which is often traded as a liquid proxy from the Chinese yuan, eased 0.1 percent to $0.7088, after falling 0.4 percent last week. Tokyo-listed Brazilian stock exchange traded funds (ETFs)  jumped nearly 14 percent to 7-1/2-month highs after Bolsonaro, a former Army captain, propelled to victory in the presidential election. The safe-haven Japanese yen  has benefited from the global sell-off in riskier assets as investors unwound carry trade exposures. It gained 0.6 percent last week and was last at 111.98 per dollar. Over this week, investors will be keeping an eye on the Bank of Japan’s monetary policy announcement due Wednesday. The dollar index .DXY rose 0.1 percent to 96.471 after gaining 0.7 percent last week. The euro hovered near a more than two-month low to hold at $1.1394. Investors heaved a sigh of relief after German Chancellor Angela Merkel's junior coalition partners gave her conservatives until next year to deliver more policy results. However, concerns loomed over her future after both parties suffered in a regional election on Sunday. Sterling held near a two-month trough of $1.2775 ahead of Britain's annual budget due Monday. Finance Minister Philip Hammond will likely urge his divided Conservative Party to get behind the government's push for a Brexit deal, or put at risk a long-awaited easing of austerity. In commodities, oil firmed with US crude CLcv1 up 30 cents at $67.89 per barrel and Brent LCOcv1 added 34 cents to $77.96. Spot gold XAU= was barely changed at 1,232.21 an ounce.