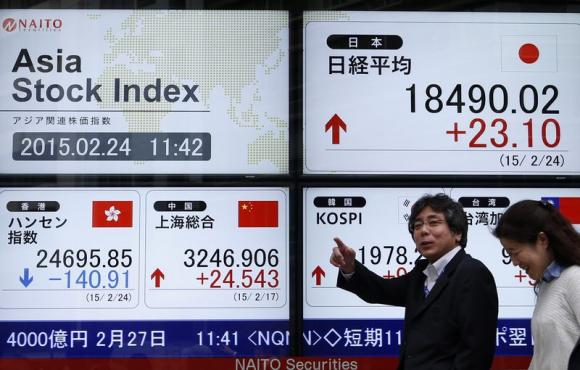 TOKYO (Reuters) - Asian shares pulled further away from a five-month high on Friday as a sharp pullback in crude oil prices dampened risk appetite, though Japanese stocks crawled to a fresh 15-year peak after the dollar surged against the yen overnight. The dollar's strength followed upbeat USdata, which tilted expectations back toward an early interest rate hike by the Federal Reserve. MSCI's broadest index of Asia-Pacific shares outside Japan .MIAPJ0000PUS slipped 0.3 percent after advancing to a five-month high on Wednesday. In a mixed day for the region, South Korean shares fell after a seven-day rally and Malaysian and Thai stocks declined modestly. But shares in Australia and Hong Kong nudged higher. Tokyo's Nikkei .N225 was up 0.1 percent after touching a high not seen since June 2000, with strong domestic industrial output data lending support in addition to the weaker yen. The dollar inched down 0.1 percent to 119.25 yen JPY= after rising about 0.5 percent overnight from a low of 118.68. The dollar index hovered near a one-month high of 95.357. Dollar bulls, disappointed earlier this week by perceived dovish signals from Fed Chair Janet Yellen, took heart again after data released on Thursday showed UScore inflation rose more than expected. Robust USdurable goods orders also helped, with both sets of data driving Treasury yields higher and supporting the dollar. Investors are now waiting on revised fourth quarter USgross domestic product data due later on Friday for another health check of the world's largest economy. Economists polled by Reuters expected USgrowth in the fourth quarter to be revised down to 2.1 percent from a preliminary 2.6 percent. ECONUS "As growth in the upper range of 2 percent is the Fed's prerequisite for an early and sustained rate hike, a figure just around or below 2 percent is likely to hurt expectations for a June hike and weigh on the dollar," said Masafumi Yamamoto, market strategist at Praevidential Strategy in Tokyo. The euro was up 0.2 percent at $1.1213 EUR=, but still near the one-month low of $1.1184 plumbed overnight. UScrude oil posted a modest rebound and was up 1.3 percent at $48.80 a barrel CLc1 after plunging 5.5 percent the previous day as rising USinventories countered expectations for recovering demand. [O/R] Despite the sharp overnight slide, UScrude was still on track for its first monthly rise in eight. North Sea supply outages and renewed fears of gas supply disruption in Europe have recently supported prices.