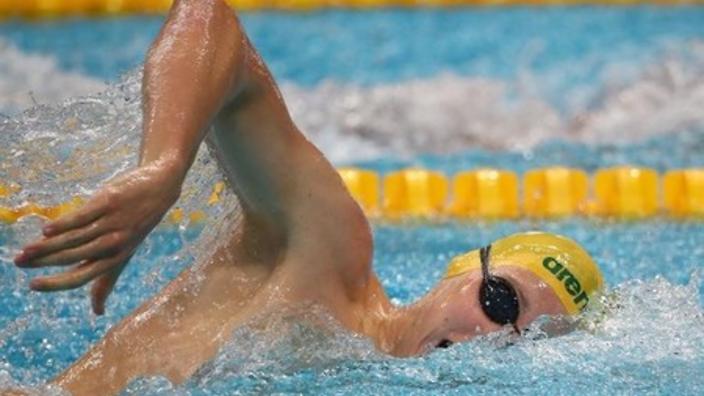 BUDAPEST - Australia's Olympic champion Mack Horton was forced into an early tussle to qualify for the men's 400 metres freestyle final alongside Chinese rival Sun Yang on the opening morning of swimming's world championships on Sunday.

Horton finished third in his heat to qualify fifth fastest as Austria's Felix Auboeck clocked a personal best three minutes 44.19 seconds to secure a centre lane berth with Sun at the Duna Arena.

The 25-year-old Chinese was sixth at the 300m mark in his heat but stormed back to finish 0.36 seconds behind Auboeck's qualification mark. Sun's time was over two seconds behind the year's world-leading time which he recorded at the Chinese national championships.

"I usually go for top two so when I was third I was a little bit worried," Horton told reporters. "You always feel better after your first swim and to blow away the cobwebs."

Hosszu clearly revelled in racing in front of her home crowd and was smiling and waving to both sides of the impressive indoor arena after finishing in two minutes 07.49 seconds.

The Olympic champion finished over two seconds ahead of her nearest rival, Canada's Sydney Pickrem, with Olympic silver medallist Siobhan-Marie O'Connor of Britain, who nearly edged Hosszu out of gold in a fingertip finish in Rio, qualifying for the semi-finals in fourth.

In her title defence, Katie Ledecky was also in prime form as the American recorded a time of three minutes 59.06 seconds, a championship record, in the women's 400m freestyle heats.

On a morning where a raft of Olympic champions set out their stalls for world title glory, Adam Peaty of Britain coasted into the semi-finals of the men's 100m breaststroke as the fastest qualifier with a time of 58.21 seconds -- the seventh fastest of his career.

Earlier Sarah Sjostrom of Sweden posted the fastest time in qualifying for the semi-finals of the women's 100m butterfly. Olympic champion Sjostrom, who won European gold seven years ago in Budapest and is seeking a third world title in the event, recorded a time of 55.96 seconds.

The United States stayed on course for a golden double in the 4x100m freestyle relays. The US Quartet topped qualification in the women’s heats, while the men posted the third quickest time behind Brazil and Australia ahead of tonight’s finals. -Reuters