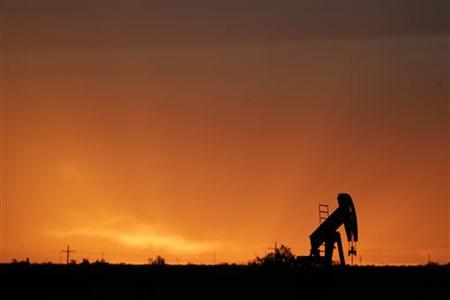 NEW YORK - Last fall, when the price of oil started dropping, fund manager Craig Hodges figured crude would rebound in 2015 and began buying shares of companies he thought would be unfairly hit, including construction company Primoris Services Corp and Eagle Materials Inc, which produces sand used in fracked wells. Hodges, who runs the $2.1 billion Hodges Small Cap fund, is now starting to concede that oil prices will stay low for as long as a year or more because of a global glut. Even the air strikes Thursday in Yemen by Saudi Arabia and its Gulf Arab allies, which prompted a one-day 5 percent boost to the price of oil, presented "a traders move" and doesn't signal a sustained move up, Hodges said. Oil fell 6 percent today to about $48 a barrel. Instead of looking for a bounce back this year, Hodges is now on the hunt for companies that can take advantage of low prices and are strong enough to withstand a year or more of waiting for oil to be more profitable for producers. It could be two or three years before oil goes back above $70 a barrel, he said. While his fund is top-loaded with companies like American Airlines Group Inc and affordable footwear retailer Shoe Carnival Inc that are benefiting from cheap gas prices, he is also buying stakes in companies such as Matador Resources Co - an energy company that has been using the slow market to negotiate lower-priced contracts with its suppliers to lower costs. Matador shares are down 16 percent over the last six months, but are up 5.8 percent for the year through Thursday. Primoris Services is down 24 percent this year, while Eagle Materials is up about 8 percent. Hodges' fund as a whole is up 2.7 percent this year, better than 62 percent of its peers. The benchmark Standard & Poor's 500 Index is little changed since the beginning of the year. "Oil could stay down longer than anyone is anticipating," Hodges said. He began buying exploration and production company Comstock Resources Inc after it fell from about $28 a share in July to $4 in early March. The company changed plans and stopped drilling in its most expensive fields to focus on lower-cost acreage and on naturalgas, Hodges said. Its recent $700 million bond issue also gives it a financial backstop through at least 2019, he said. PERSISTENT GLUT Increasingly, mutual fund managers don’t see the oil glut going away any time soon. Lord Abbett's Thomas O'Halloran, for example, last year was calling fracking stocks one of the pillars of his $3.6 billion Developing Growth fund, among the top-performing small cap funds over the last decade. He is now shifting more money into solar companies. "We think that there's another leg down" to oil prices, O'Halloran said. His fund is up 4.1 percent this year, better than 60 percent of its peers. At London-based Guinness Atkinson fund managers have been adding more natural gasexposure to their portfolios, out of the theory that a slump in oil production following price declines will over time boost natural gas commodity prices. The firm is keeping some oil exposure in light of political factors such as the Yemen airstrike, but it doesn't expect a recovery based on fundamentals until at least the end of the year. "It may take even longer than that," said Will Riley, one of the portfolio managers of the Guinness Atkinson Global Energy fund  . The fund is down 2.1 percent this year, better than 48 percent of its peers. Riley, has been buying natural gas companies such as Southwestern Energy Co, thinking the price of natural gas should rise as the amount of so-called associated natural gas, the by-product of crude oil wells, falls as firms cut back on drilling, he said.  "The oversupply in the US natural gas market should moderate a bit later this year," he said. FUNDAMENTAL QUESTIONS The capitulation of fund managers comes at a time when retail and professional investors are diverging when it comes to predicting the price of oil. Retail investors have been pouring billions into exchanged traded funds that track the price of oil in an attempt to call the bottom, even as the pros have suggested that bottom isn't here yet, and may last for some time.. The US Oil Fund, the best-known of several exchange traded funds that have a long position in oil prices, has netted $2.1 billion in new investor dollars this year, according to Lipper data, more than all but seven other funds. Most of that money appears to come from retail investors and speculators in an attempt to call the bottom for oil prices, analysts said. The fund is down 15.8 percent this year. Dwindling storage capacity in the US, along with the possibility that sanctions are lifted that brings more oil from Iran or Russia onto the market, could lead to an even greater glut on the market, several analysts said. "The people who think that this is a great chance to get into the energy patch are a little premature," said Charles Smith, portfolio manager of the Fort Pitt Capital Total Return fund. He has only has one energy company, pipeline company Kinder Morgan Inc, in his portfolio, and isn't tempted to add more - he is waiting until oil prices slip to the high $20s before he would buy into the sector, he told Reuters. Unless demand picks up in China, oil could fall as low as $20 a barrel from its current price, and stay in a long-term range between $20 and $40 a barrel, said Omar Aguilar, chief investment officer of equities at Charles Schwab Investment Management. As for a return to the $100 a barrel prices from last spring, Fort Pitt's Smith said that the growth of renewable energy such as solar and the fracking boom have rendered that unlikely. "We're not expecting to see $100 a barrel for the next 10 years," he said. - Reuters