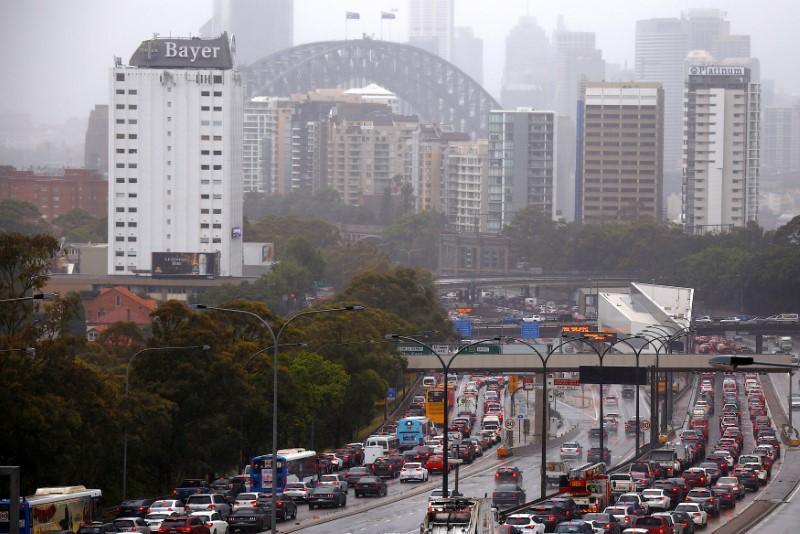 SYDNEY (Reuters) - Torrential rain and gale force winds lashed Australia’s biggest city of Sydney on Wednesday causing commuter chaos, flooding streets, railway stations and homes, grounding flights and leaving hundreds of people without electricity. Police called on motorists to stay off the roads. One person was killed in a car crash and two police officers seriously injured when a tree fell on them as they helped a stranded motorist. Greg Transell, an office manager in Sydney’s north told the Australian Broadcasting Corporation that strong winds caused widespread disruption to the tower block office where he works. “I started to go upstairs to see if there was any damage and next minute there was an almighty bang and it ripped panels off the roof in the warehouse,” said Transell. Australia’s Bureau of Meteorology (BOM) said within just a few hours Sydney got more than 100 mm of rain, a level that the country’s most populous city would normally get through the whole of November. “That’s the sort of rainfall you’d expect to see once every 100 years,” said Ann Farrell, the bureau’s state manager, told reporters. Although the rains offered a welcomed respite to farmers who have suffered through a sustained drought in recent months, the weather caused major disruptions to Sydney’s transport network. Sydney Airport, the country’s busiest, said 130 flights had been cancelled or delayed after it was forced to close two of its three runways. “The storm is pretty intense in and around the airport,” Cait Kyann, an airport spokeswoman, told Reuters. “We are operating from a single runway so that means that there are delays and likely some flights will be cancelled.” Ausgrid, the nation’s biggest electricity network, said the storm had cut power to 8,100 customers in Sydney and the Central Coast area to its north. By late afternoon, 1,700 homes and businesses remained without power, Ausgrid said. There was chaos on Sydney’s roads as the storm struck only hours before the main morning peak hour, transforming some streets into fast-flowing rivers and parks into lakes. Several stranded motorists were plucked from rising floodwaters. “We are asking all road users to reconsider the need to be on the roads throughout what will be a severe rain event,” said New South Wales state Assistant Police Commissioner Michael Corboy. The BOM said the storms would last through most of the day before easing, with gale force winds whipping up four metre (12 feet) waves that would pound Sydney’s beaches. In contrast, in Australia’s northern state of Queensland, soaring temperatures near 40 degrees Celsius (104 Fahrenheit) and strong winds exacerbated major bushfires. Firefighters have been battling for nearly a week to contain more than 80 fires across Queensland. “We are expecting a very bad day,” Craig Crawford, fire and emergency services minister for the Queensland state government told Australian Broadcasting Corp radio. “These are the kind of days where people could lose their lives.”