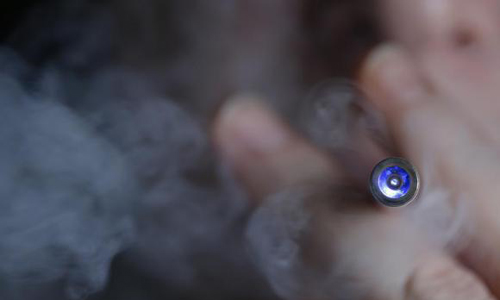 LONDON - One in five teenagers have experimented with e-cigarettes, a large study of British school students showed on Tuesday, fuelling debate about the widespread availability of the electronic devices. Many experts view the metal tubes that heat nicotine-laced liquid into an inhalable vapor as a lower-risk alternative to smoking. But questions remain about long-term safety and their use among impressionable adolescents. In a survey of more than 16,000 people aged 14-17 years in northwest England in 2013, 19.2 percent said they had tried or purchased e-cigarettes, according to a paper published in the journal BMC Public Health. E-cigarette use, or "vaping", was highest among smokers, reaching 75.8 percent in those with a habit of at least five a day, although 15.8 percent of teenage vapers had never smoked conventional cigarettes. Karen Hughes of the Centre for Public Health at Liverpool John Moores University and other authors of the study said the research suggested experimentation, rather than a desire to quit smoking, was the main driver of teen use. "There is an urgent need for controls on the promotion and sale of e-cigarettes to children," they concluded. Wilson Compton of the U.S. National Institute on Drug Abuse wrote in an accompanying commentary that e-cigarettes, at least for some groups, were adding a new recreational drug experience to an existing repertoire of risky behaviors. Other experts, however, cautioned against jumping to conclusions, particularly since the study did not follow up to see whether children continued to use e-cigarettes after experimenting with initial puffs. "Other surveys have so far found that progressing from ever trying an e-cigarette to regular use amongst non-smoking children is very rare or entirely absent, suggesting that, to date, e-cigarettes are not responsible for creating a new generation of nicotine addicts," said Linda Bauld, professor of health policy at the University of Stirling. More than 2 million adults use e-cigarettes in Britain, about one third of whom are ex-smokers and two-thirds current smokers, according to the charity Action on Smoking and Health. Nearly all big tobacco companies - including Philip Morris International, British American Tobacco, Japan Tobacco International and Imperial Tobacco Group - now sell e-cigarettes to diversify away from the market for traditional cigarettes, which is shrinking as more people quit or cut back. - REUTERS