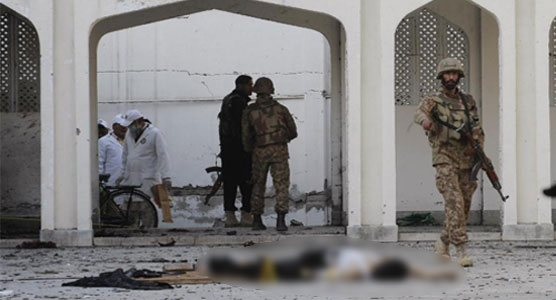 PESHAWAR (Web Desk / Agencies) - Identity of one terrorist who attacked imambargah in Peshawar's Hayatabad area on Friday has been confirmed, 92 News reported on Saturday.

At least 20 people were killed and more than 40 injured when several terrorists stormed Imamia mosque in Hayatabad during Friday prayers.

The 22-year-old attacker belongs to Tehsil Bara of Khyber tribal region.  The Ministry of Interior has also gathered evidence after receiving all the information.

The Taliban claimed responsibility for the violence.

There were varying accounts of how many attackers carried out the assault. The militants released a video showing three attackers while the head of the provincial police, Nasir Durrani, said four or five attackers were involved.

The attackers entered the mosque from a building next door that was under construction, he said. They jumped over an outer wall into the mosque courtyard.

One person then blew himself up, creating a diversion so the other attackers could enter the mosque, Durrani said. He said at least three attackers died in the violence — two by blowing themselves up, and a third was killed by worshipers at the mosque.

"People here showed great courage. They grabbed one of the attackers from his neck, and he couldn't detonate (his explosives), and he was shot and killed," Durrani added.

Authorities were still examining the scene, and Durrani did not say what happened to any of the remaining attackers.

Some worshipers who fled the mosque reported that at least some of the attackers were wearing security uniforms.

One of the dead, Naveed Abbas, worked for the U.N. Department of Safety and Security, according to a statement released by the United Nations. Secretary-General Ban Ki-moon condemned the attack and urged Pakistani authorities, "to redouble their efforts to protect religious and ethnic monitories and to combat terrorism in all its forms," the statement said.

In Washington, State Department spokeswoman Jen Psaki said the U.S. was saddened by the attack and stands in solidarity with the government and people of Pakistan in confronting extremist violence.