Only World Cup win will end Proteas’ tag as chokers 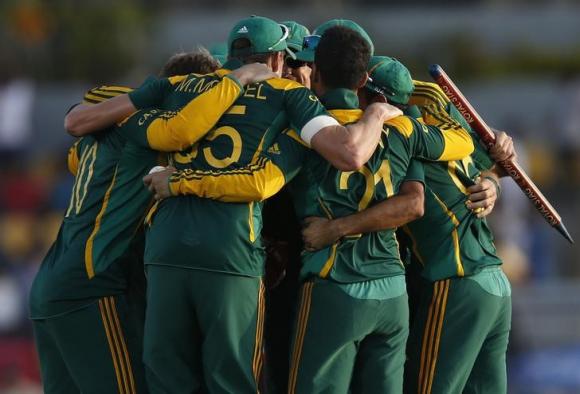 Only World Cup win will end Proteas’ tag as chokers

HAMILTON (Reuters) - A meticulous planner, the South African captain AB de Villiers has prepared himself for everything at the World Cup. Like every South African, de Villiers needs no reminding that the Proteas have never won the World Cup and carry the label of chokers courtesy of their previous near misses. South Africa will open their latest World Cup campaign against Zimbabwe at Hamilton on Sunday. On the eve of the match, de Villiers attended the mandatory pre-match news conference and was prepared for when the inevitable question came up about his country's World Cup record. "Those past happenings and the chokers and all of that, that's still very much part of our system," he told reporters. "There's no doubt about it. We're going to have to win to take that away, and we know that. "But like I said before, it's a great opportunity for all of us. The guys being here can make history, and just want to slow things down. That's the main message for this tournament." South Africa have been among the favourites to win every World Cup they've contested since 1992 but have come up short each time, losing in the semi-finals in 1992, 1999 and 2007 and the quarter-finals in 1996 and 2011. While de Villiers conceded that the only thing way South Africa could shed their chokers' tag is by winning the World Cup, he also said it was important they don't get too fixated on the title. "We're not getting ahead of ourselves, we're not thinking about the trophy at the moment," he said. "We know we can win, there's no doubt about it, but we know there are lots of obstacles along the way that we're going to have to overcome." South Africa are again one of the favourites to win the World Cup and for good reason. They have a strong bowling attack and a powerful batting lineup, led but de Villiers, who is ranked as the world's best One Day International batsman. Zimbabwe are one of the tournament longshots, though an improving team capable of testing anyone on their day, and de Villiers was sticking to the sportsman's mantra of talking up his opponents. "They beat Australia not long ago. They're a dangerous side," he said. "They've come a long way and think they're under good leadership at the moment from the captain and the coach, so definitely a side to be reckoned with. "We've got our plans in place, but we know we'll have to take them up seriously tomorrow. It's a big start for both teams."