LAHORE (92 News) – The Out Patient Departments (OPDs) remained closed in all government hospitals due to the strike of doctors, nurses and paramedics against the Medical Teaching Institutions (MTI) Reform Act across Punjab. According to the details garnered, several operations have been canceled after para-medical staff and doctors took to the streets across the province against MTI Act. 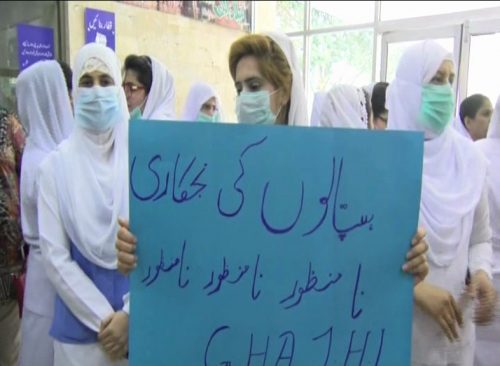 Patients and their attendants coming from far-off areas faced difficulties for treatment due to closure of the OPDs. The protesting doctors have blocked Jail Road in Lahore and boycotted Outpatient Departments (OPDs), creating problems for the patients who have come from far flung areas for medical treatment. On the other hand, doctors in Multan, Faisalabad and Rawalpindi also staged demonstration and chanted slogans against the concerned authorities for not fulfilling their demands. 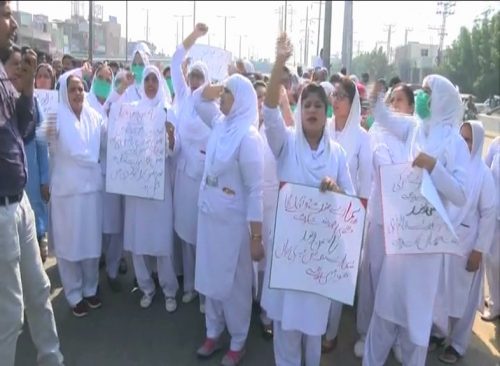 Meanwhile, Chief Minister of Punjab Sardar Usman Buzdar has formed a committee to talk to doctors about their issues and reservations.

Earlier, on the call of the All Pakistan Grand Health Alliance, doctors and paramedics observed a strike against the MTI Act. In Islamabad, doctors observed a strike in OPD at PIMS. Patients chanted slogans against the doctors. Doctors and paramedics closed the laboratories for the second day in Faisalabad. In Peshawar, all three hospitals remained closed due to the strike. Citizens and patients, especially who are suffering from dengue fever, are facing problems due to the strike. Under the Punjab Medical Teaching Institutions (Reforms) Ordinance 2019 drafted on the pattern of Khyber Pakhtunkhwa’s MTI Act, the government hospitals will be run by fully empowered Board of Governors (BoGs) which will consist of all members from the private sector. The BoGs shall also have powers for the appointment of admin officials on key slots and appointment of senior faculty members. The post of principal shall be converted into Dean who shall be appointed by the BoG for a period of five years. Similarly, there will be a management committee for each hospital, consisting of a hospital director, medical director, nursing and finance directors and two members nominated by the BoG. Headed by Dean, the Management Committee will have powers to terminate any and all the employees of the institution in accordance with the rules and regulations framed under the Ordinance.