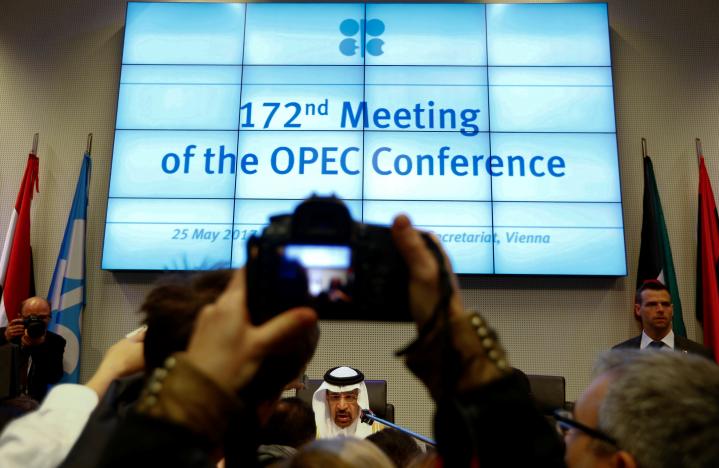 VIENNA –OPEC and non-member oil producers began talks in Vienna on Thursday to extend output cuts, most likely by nine months, in an effort to clear a global stocks overhang and prop up crude prices.

The Organization of the Petroleum Exporting Countries is discussing whether to prolong an accord reached in December in which it and 11 non-members agreed to curb oil production by about 1.8 million barrels per day in the first half of 2017.

Most OPEC ministers, delegates and the market see a nine-month extension - instead of the initially suggested six months - as the base-case scenario but some countries including Russia have suggested an unusually long duration of 12 months.

"It seems highly likely... that we are going to roll over with the same terms for nine months," Saudi Energy Minister Khalid al-Falih said before the meeting began, adding that OPEC members Nigeria and Libya would still be excluded from cuts.

"There have been suggestions (of deeper cuts), many member countries have indicated flexibility but ... that won't be necessary," he said, adding that global stocks were falling and Saudi exports declining.

Iranian Oil Minister Bijan Zanganeh, who often clashed with Saudi Arabia at previous OPEC meetings, said he would follow the majority of members in their decision and added there was no proposal on the table for deeper cuts.

By 0900 GMT, Brent crude was trading flat at around $54 per barrel. It fell earlier by around $1 after comments from ministers dashed market bulls' hopes for deeper cuts or an extension by as long as 12 months.

OPEC's de facto leader, Saudi Arabia, and top non-OPEC producer Russia have said cuts need to be extended to speed up market rebalancing and prevent oil prices from sliding back below $50 per barrel.

OPEC sources have said the Thursday meeting will highlight a need for long-term cooperation with non-OPEC producers.

The group could also send a message to the market that it will seek to curtail its oil exports, which have not declined as steeply as its production.

Falih said on Thursday that Saudi exports would fall in June and were below what customers had demanded.

The formal OPEC meeting started at around 0900 GMT. It will be followed by a joint gathering with non-OPEC initially scheduled for after 1320 GMT.

OPEC's cuts have helped push oil back above $50 a barrel this year, giving a fiscal boost to producers, many of which rely heavily on energy revenues and have had to burn through foreign-currency reserves to plug holes in their budgets.

Oil's earlier price decline, which started in 2014, forced Russia and Saudi Arabia to tighten their belts and led to unrest in some producing countries including Venezuela and Nigeria.

"Russia has an upcoming election and Saudis have the Aramco share listing next year so they will indeed do whatever it takes to support oil prices," said Gary Ross, head of global oil at PIRA Energy, a unit of S&P Global Platts.

The price rise this year has spurred growth in the U.S. shale industry, which is not participating in the output deal, thus slowing the market's rebalancing with global stocks still near record highs.

OPEC has a self-imposed goal of bringing stocks down from a record high of 3 billion barrels to their five-year average of 2.7 billion.

"We have seen a substantial drawdown in inventories that will be accelerated," Falih said. "Then, the fourth quarter will get us to where we want." –Reuters