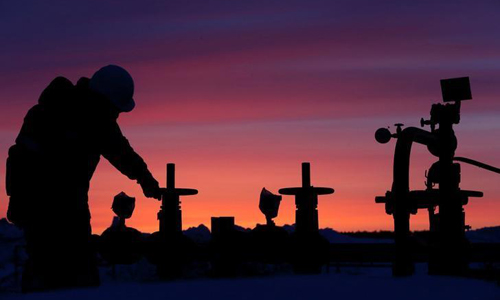 NEW YORK- OPEC producers have their sights set on a sustained oil price of $50-$60 per barrel, a modest ambition for the first cut in supply by the oil exporting group in eight years, says one of the industry's top forecasters.
Benchmark U.S. oil prices CLc1 have risen around $4, or around nine percent, to over $48 per barrel since the Organization of the Petroleum Exporting Countries (OPEC) agreed last week to shave output. "You don't manage the market unless you have a price in mind," said Gary Ross, founder and executive chairman at the New York-based consultancy PIRA. "They are being cautious, they want to see what will happen with shale. But OPEC's price aspirations only go up over time. They don't go down." The deal marks the return to supply caps for the producer group after a brutal two-year free-for-all when OPEC members ditched output targets and pumped more than the market needed in a price war that bloodied U.S. shale producers. U.S. oil output fell to around 8.7 million barrels per day in July, the lowest since May 2014 and down over 730,000 bpd on the year, mostly as shale producers hit by low oil prices cut output. Ross challenged the assumption that a higher price could be self-defeating for OPEC because it will encourage shale producers to boost output. "We're not necessarily about to be overwhelmed by shale oil," he said. "The timing of this is quite deliberate, OPEC is doing this heading into winter and at a time when supply from non-OPEC producers is down." Peak northern hemisphere energy demand during the cold season provides OPEC with a window to reach its price aspirations, Ross said. Shale producers will need four to six months to bring new production online, and that may take longer in areas where cold weather prevents work. After letting thousands of employees go over the past two years, it will take time for shale producers to build up operations and costs will rise quickly, he added. The impact of fast-rising costs on shale producers was likely another factor in OPEC's thinking, Ross said. OPEC producers have less variable costs and so will benefit more from the uplift in oil prices than shale producers, he said. While the price rout hurt OPEC's competitors, the group's oil ministers were under pressure from their own central bankers and finance ministers to do something to reverse the impact of low prices on their own revenues, Ross said. Many have had to cut budgets and the generous benefits as they adjusted to the longest and deepest oil price rout since the 1980s. The $4 rise in prices is already worth over $100 million a day in additional revenue for OPEC producers pumping around 33 million bpd of crude. OPEC kingpin Saudi Arabia was not just dressing up a seasonal variation in output as a supply cut, Ross said. The kingdom typically reduces output after summer, when it no longer needs to burn crude for power generation to feed demand for air conditioning. "There is a lot more to it than that," he said. "The policy to push for market share is over. It's a matter now of going back to managing the market." -Reuters