Chief of the Naval Staff Admiral Muhammad Amjad Khan Niazi graced the Opening Brief of the exercise as chief guest and was received by Chief of Staff Vice Admiral Faisal Rasul Lodhi.

Later, Deputy Chief of Naval Staff (Operations) Rear Admiral Javaid lqbal presented the overview of war game outlining objectives and concepts set forth for demonstration during the exercise. He highlighted that the war game will comprise participation of Tri-Services and Govt Ministries. Shamsheer-e-Bahr-VIll is the Flag ship war game of Pakistan Navy that is held biennially to corroborate various concepts which are validated in subsequent maritime exercises prior being incorporated in naval strategy. 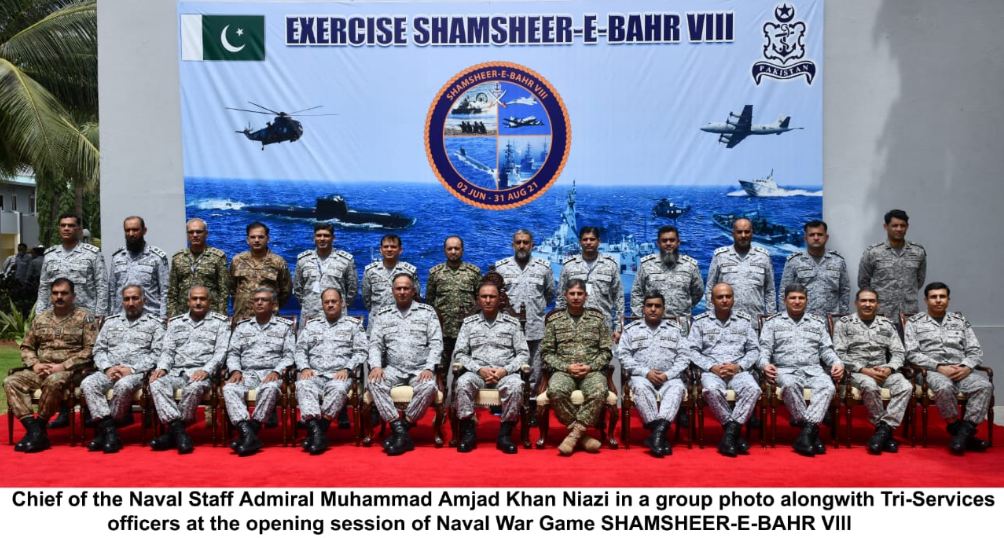 Addressing the occasion, Chief of the Naval Staff highlighted that Pakistan is facing multitude of internal and external challenges which necessitate external vigilance and strong resolve. The Admiral emphasized that the unresolved Kashmir issue remains the flash point between Pakistan and India. Indian heavy handed policies in IIOJ&K and attempt to enforce fascist control over IIOJ&K have serious implications towards security in South Asia and the world at large.

The Naval Chief underscored the significance of war games in military planning process. The Admiral appreciated the thought provoking presentations of Force Commanders, which would help in crystallizing plans to enhance maritime security of Pakistan. Chief of the Naval Staff reiterated Pakistan's increasing relevance in the backdrop of CPEC, operationalization of Gwadar port. The Admiral highlighted that merchant traffic to/from Gwadar port will increase and so will the responsibility of Pakistan Navy to ensure unhindered flow of traffic in our waters.

He stressed upon the fact that the economic well-being of Pakistan is tied with the freedom to use the seas for trade; therefore, the prosperity of our people is intrinsically linked to the security of our Sea Lines of Communication.

The event was attended by Armed Forces officers besides bureaucrats and reps of Federal Ministries.