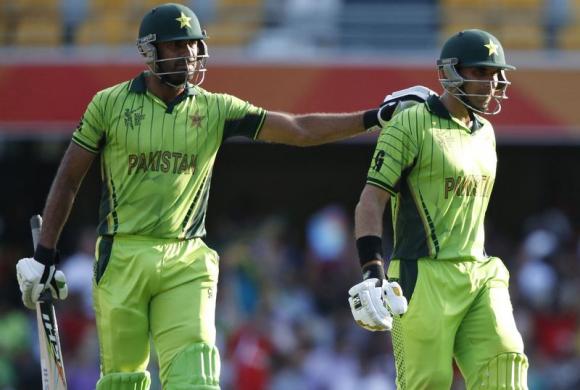 NAPIER - A pair of comfortable wins after two losses to start the World Cup have given a more settled look to Pakistan but the 1992 champions still seem to have no clue as to how to solve their opener problem. Pakistan's troubles started when all-rounder and regular opener Muhammad Hafeez was ruled out with a calf muscle injury a week before the World Cup, and the team flew out Nasir Jamshed as a replacement. Senior batsman Younis Khan, desperately in need of runs, was moved up to partner Ahmed Shahzad at the top in Pakistan's opening match against arch-rivals Indiabut the experiment failed as the 37-year-old managed just six runs. The out-of-form Younis lost his place in the wake of the 76-run loss to their bitter rivals, giving Jamshed the chance to claim the spot of the second opener. However, the 25-year-old has since scored just five runs in his three outings. Adding to his struggles with the bat, Jamshed has been extremely poor in the outfield, his dropped catches making him the target of barracking from the crowd. Coach Waqar Younis said Pakistan would need to go back to the drawing board. "We need an opener as we don't have a third option after the return of Hafeez," Younis told reporters after Pakistan's 129-run win over United Arab Emirates in Napier on Wednesday. "It's a problem, there's no doubt about that. We have two days before our next match and we will sit down and rework our strategy on what our best 11 is." RIGHT BLEND The string of failures at the top have meant Pakistan managed just 11, 0, 1 and 10 for the opening wicket in their four matches at the World Cup thus far. When asked about the lack of a third opener in the Pakistan squad, chief selector Moin Khan had said wicketkeeper Sarfraz Ahmed would fill the slot if required. While Pakistani media have called for the dashing Sarfraz to be given a chance as Shahzad's partner, Younis is not convinced the 27-year-old has the right technique for conditions in Australia and New Zealand. "Sarfraz is a wicketkeeper-batsman and plays at number six or seven," the former Pakistan fast bowler added. You have to see the conditions and no doubt Sarfraz is an asset. But you can't bet on his career and what if his technique is not suited to the conditions here?" Sarfraz has played 36 ODIs for Pakistan and his inclusion will also be a relief for Umar Akmal, who has been far from confident with the gloves. While the coach did not rule out a future role for the experienced Younus, Pakistan must soon find the right blend with important fixtures against South Africa and Ireland coming up in their campaign. -Reuters