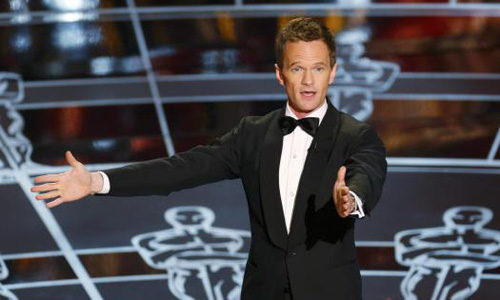 LOS ANGELES (Reuters) - Love him or hate him, Neil Patrick Harris proved to be one of the hardest-working hosts in Oscar history on Sunday night, singing, dancing and even sprinting in his underpants onto the stage of Hollywood's Dolby Theatre. But the 41-year-old Broadway and television talent who came to prominence as the child star of "Doogie Howser, M.D.," also confronted a major elephant in the room, opening the show with a fleeting but pointed jab at the homogenous field of Oscar nominees. "Tonight we honor Hollywood's best and whitest, sorry, brightest," Harris enthusiastically dead-panned to hearty laughter that seemed to break the usual pre-show jitters among the movie royalty packing the auditorium for the 87th Academy Awards. The opening joke was a reference to the criticism Oscar voters faced this year for failing to nominate a single performer of color in any of the acting categories for the first time in many years, including the critically acclaimed star of the civil rights drama, "Selma," David Oyelowo. It was the first of several politically charged moments of the night, including Patricia Arquette's remarks in accepting her statuette as best supporting actress for her role as a single mom in "Boyhood." "To every woman who gave birth, to every taxpayer and citizen of this nation, we have fought for everybody else's rights," Arquette said on stage. "It's our time to have wage equality once and for all and equal rights for women in the United States of America," she added. "Citizenfour" filmmaker Laura Poitras went on to hail National Security Agency whistleblower Edward Snowden as a hero as she accepted the award for best documentary. "When the most important decisions being made affecting all of us are made in secret, we lose our ability to check the powers that control," she said. Her speech was quickly followed with a biting counterpoint, and play on words, from Harris: "The subject of 'Citizenfour,' Edward Snowden, could not be here for some treason."   STANDING OVATIONS   In one of the evening's more emotional moments, rap artist Common and R&B star John Legend sang a duet of "Glory," the anthem from "Selma" that also has played at "Black Lives Matter" rallies protesting lethal police force against racial minorities across the country. The two went on to share the Oscar for best song as composers of "Glory," and their performance brought the celebrity-studded house to its feet, some with tears in their eyes. The second standing ovation of the night came after Lady Gaga delivered a rousing medley from the musical film classic "The Sound of Music," then welcomed the star of that movie, Julie Andrews, onto the stage. "Dear Lady Gaga, thank you for that wonderful tribute," said a visibly moved Andrews, 79. "It's hard to believe that 50 years have gone by since that joyous film was released."   UNFLATTERING REVIEWS   Early reviews of the live ABC telecast, which ran about 40 minutes beyond its three-hour schedule, were generally unflattering of the show. And Harris drew largely harsh critiques from viewers chiming in on social media. Variety credited Harris with getting the show off to a buoyant opening but faulted bad writing for what it described as a subsequent breakdown in the telecast. "Too much clunky scripted material flummoxed even Harris' impish, good-natured charms," Variety's Brian Lowry wrote. The New York Times' Alessandra Stanley called Harris' performance "bland," while offering tepid kudos for his zaniest stunt of the evening. In a comic homage to a memorable scene from best-picture Oscar winner "Birdman," Harris was followed on camera running from backstage onto the show's main stage, dressed only in his white underpants, black shoes and socks, to introduce presenters of the sound-mixing award. Time magazine's early online review said Harris seemed off his game, despite having "been pre-sold as an expert live host." Harris was perhaps at his best showing off his chops as a song-and-dance man in the night's opening musical number - a salute to movie magic that also marked a conscious effort to connect with tech-savvy younger television viewers. "Check out the glamor, and glitter/ people tweeting on the Twitter / and no one's drunk and bitter yet/ because no one has lost," sang Harris, the star of the hit CBS sitcom "How I Met Your Mother," who previously has won three Emmys for hosting Broadway's Tony Awards. Another overt bid to reach younger viewers came in a musical performance of the pop duo Tegan and Sara teaming up with former "Saturday Night Live" star Andy Samberg and the Lonely Island trio for a rendering of the kids' favorite "Everything Is Awesome," from "The Lego Movie." Turning one of last year's great Oscar faux pas into one of this year's more comical interludes, John Travolta returned to the stage as a presenter with singer Idina Menzel, whose name he mangled at the 86th Oscars show. He went out of his way to pronounce her name correctly this time, then rather sheepishly stood aside to leave Menzel the task of pronouncing the names of the best original song nominees. The winners, Legend and Common, neatly brought the evening's political and comic moments full circle.