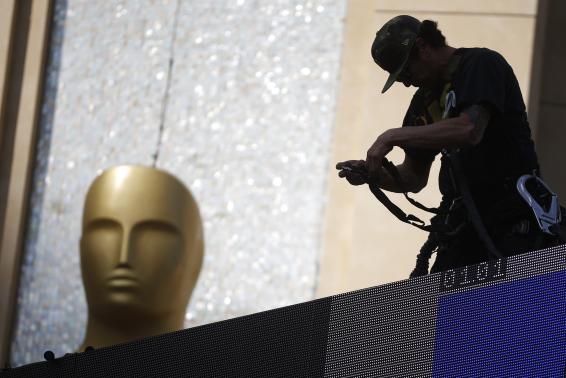 LOS ANGELES (Reuters) - (Reuters) - To the outside world, Hollywood might ooze effortless glamour, but just about anyone who makes movies will say the process is a long grind, and a continual blow to the ego and bank account. That might explain why two films that embody the inherent struggle of show business - "Birdman" and "Boyhood" - are top contenders for best picture at Sunday's 87th AcademyAwards. Even if "Birdman" has the slightest edge, the race is one of the hardest to predict in years, experts say, adding welcome suspense to Hollywood's annual climax, the largest televised event in the United States outside of the sports world. And there's room for a dark horse to come in and win the top honor from the Academy of Motion Picture Arts and Sciences, made up of 6,100 people who toil in the industry. The strength of "Birdman" lies not only in its nine Oscar nominations, a near sweep of awards from Hollywood's guilds and cinematic derring-do, but also in a story the appeals to the Academy's largest voting bloc: actors. Director Alejando G. Inarritu presents a washed up, former superhero actor trying to make a comeback, portrayed by Michael Keaton, whose own career sagged after his "Batman" heydey. "The message of the movie is even though you are unemployed and you haven't gotten all the success you deserve, you are still an amazing, terrific person," said Tim Gray, awards editor at Variety. "I think everybody in the Academy can relate to that because that's the state of normalcy for the film industry, that you spend a lot of time unemployed," he added. Keaton could therefore win best actor over Eddie Redmayne, who has won a slew of awards for his portrayal of physicist Stephen Hawking in "The Theory of Everything." NO BOX OFFICE BONANZA "Boyhood" is a more simple story of a boy of divorced parents coming of age, but director Richard Linklater earned respect from the industry for a marathon undertaking never before attempted: making the film over 12 years with the same actors. And he did it on a shoestring budget. It could be that the top contenders split best picture and best director, as "12 Years a Slave" and "Gravity" did last year. "It seems a lot of people are saying that if they vote 'Birdman' in one of those two categories, they are going to vote 'Boyhood' in the other," said Paul Sheehan, editor at awards handicapper GoldDerby.com. But because of the best picture category's preferential ballot, in which members rank their top films rather than vote for just one, a movie that is many people's second choice could prevail. For Sheehan, that's director Wes Anderson's "The Grand Budapest Hotel." Actor Bill Murray joked he was so glad Anderson was getting recognition because he would no longer have to defend the idiosyncratic director. His colorful caper staged in the bygone era of a European resort has won universal acclaim from critics and audiences. But the film that has been most popular with audiences is "American Sniper," director Clint Eastwood's gritty portrayal of late Navy SEAL Chris Kyle, the US military's most lethal sharpshooter after his four tours in the Iraq war. It has earned $307 million at the domestic box office, more than the other seven best picture nominees combined, and gathered strength in recent weeks amidst a heated debate about war and snipers. "Selma," the Martin Luther King Jr. biopic, drew early support but lost steam after it earned only two nods and became the symbol of the lack of diversity among this year's nominees. With one of the smallest collective box office showings for best picture nominees in recent times, the Academy faces a challenging year for its telecast. It is betting on big music acts and first-time host Neil Patrick Harris to bring in the young audience. People like to make fun of the Oscars, Gray says, but in a world saturated with entertainment choices, he likes to believe the awards are still "a way of curating" Hollywood's best work.