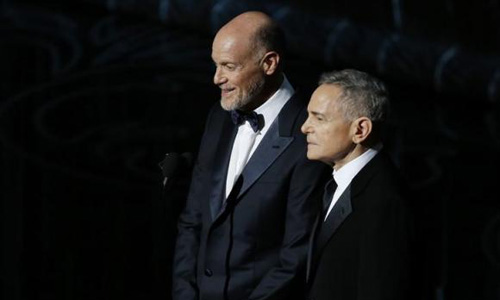 LOS ANGELES - Craig Zadan and Neil Meron, the producers behind the last three Academy Awards telecasts, will not be returning for next year's Oscars, the ceremony organizers said on Thursday. The Academy of Motion Picture Arts and Sciences, which hosts Hollywood's biggest night each year, declined to say why Zadan and Meron were not invited back. Their departure comes after the television audience for the 2015 show dropped 16 percent from the previous year and first-time host Neil Patrick Harris received lukewarm reviews. But Zadan and Meron also produced seminal Oscar moments, such as the 2014 show hosted by comedian Ellen DeGeneres which produced the highest telecast ratings in 14 years for Walt Disney Co's ABC network and the star-studded selfie that brought Twitter down. For their first year, they invited "Family Guy" creator and comedian Seth MacFarlane to host and came under heavy fire for his provocative humor. But they defended the choice because it brought in the most fickle audience, young males. Cheryl Boone Isaacs, president of the Academy, said Zadan and Meron have "have been wonderful creative partners over the last three years, contributing some of the most innovative and memorable Oscar moments." Best known for their work on musicals for Broadway, television and film, the veteran producers recently staged the live musical telecast of "Peter Pan" for NBC. "Ending 3 year deal producing #Oscars, its an honor to say 'We'd like to thank The Academy,'" Meron tweeted. - REUTERS