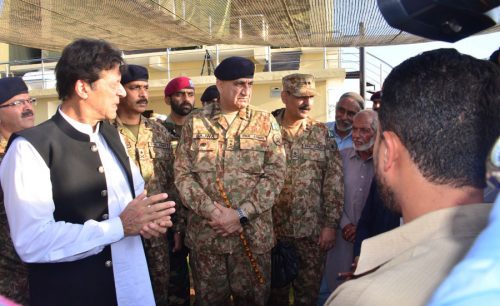 The prime minister was briefed on the ongoing situation on the LoC. Prime Minister Imran Khan also interacted with local victims of the Indian Ceasefire Violations (CFVs). Later, the prime minister also interacted with the troops. Talking to the families of the martyrs and injured, Prime Minster Imran Khan lauded their decades of resilience. “Indian deliberately targeting unarmed civilians in Azad Jammu and Kashmir and continued siege of innocent Kashmiris in Indian Occupied Jammu and Kashmir (IOJ&K) are worst examples of the human rights violations,” he said. 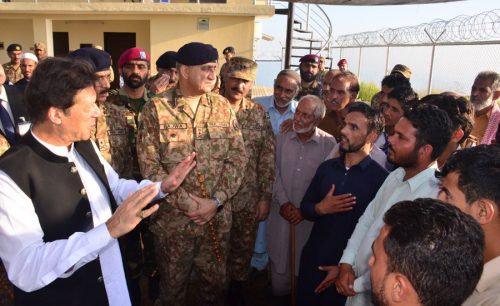 Prime Minister Imran Khan reiterated that Pakistan firmly stands with Kashmiris for their right to self-determination. “While our current efforts are to expose fascist Indian regime to the world, our Armed Forces remain fully capable and prepared to thwart any Indian misadventure or aggression,” he declared. Earlier addressing the main ceremony at GHQ in Rawalpindi on Friday, Chief of Army Staff (COAS) General Qamar Javed Bajwa reiterated that Kashmir is incomplete agenda in the completion of Pakistan. The COAS paid rich tributes to the martyrs who laid their lives for the defence of the motherland. “The sacrifices of our son of the soil will not go in vain. Our sacrifices for the sake of country are examples for the world,” he added. The army chief said that Pakistan has sacrificed a lot in the war against terrorism and today’s Pakistan is better than the one in Past in terms of security. Referring to the latest situation in the Indian Occupied Kashmir (IoK), General Bajwa has said India is carrying out worst rights violations in the held valley. “The World should take notice of the matter with immediate effect. Gen Bajwa said that Pakistan would never leave Kashmiris alone at the mercy of the situation imposed on them forcibly and illegally by the Indian government. The OCAS reassured that Pakistan Army would go to any extent for the sake of Kashmir and its freedom. “Will go for Kashmir until the last bullet, the last soldier and the last breath,” he added. “The hearts of Pakistanis and Kashmiris beat together. Pakistan’s armed forces are ready to give every sacrifice for the people of Kashmir,” The army chief maintained. He said that Pakistan today was delivering a message of peace and prosperity. “We have always emphasised the importance of peace, prosperity and dialogue,” the army chief said. “The example of Afghanistan is evidence of this,” he added. “Pakistan has always supported an Afghan-led and Afghan-owned peace process.” He concluded his remarks by paying tribute to martyrs and their families. Today, the nation is observing Defence Day and Kashmir Solidarity Day with national fervor. https://www.youtube.com/watch?v=c5v8wM4AwA8 Marking the 54th anniversary of the 1965 Pakistan-India war, the martyrs and ghazis are being tribute. The nation is also reaffirming commitment to defend the motherland against all threats.